I don’t have the answer. The market seems a bit conflicted.  Here’s what to look for today with updates to follow throughout the day.

END_OF_DOCUMENT_TOKEN_TO_BE_REPLACED

The Trump Regime and its minions like Mo Ron DeSantis in state governments have been telling us that the daily record breaking COVID infection rate isn’t a problem because the death rate is way down. That’s good news, they say.

END_OF_DOCUMENT_TOKEN_TO_BE_REPLACED

And there’s today’s headline. And what time is it when it’s 9:30 AM in New York?  That’s right kids…

END_OF_DOCUMENT_TOKEN_TO_BE_REPLACED

The famous baseball cap pattern is the inverse of the dreaded cup and handle.

The ES wuczrs (Polish) are now at the tip of the bill. The 5 day cycle projection is 3113. But the 3 day cycle is due for an upturn here. Buy the dip, sell the rip. Pick your poison.

The EZ wuczrs are now at the tip of the bill. The 5 day cycle projection is 3113. But the 3 day cycle is due for an upturn here. Buy the dip, sell the rip. Pick your …

END_OF_DOCUMENT_TOKEN_TO_BE_REPLACED

The more I read and observe the clearer the message: Nobody knows anything. And by that I mean nobody truly knows how any of this will turn out and I think this point needs to be driven home more clearly.

Tons of projections of this, that and the other. Just stop. I happen to think there are times to simply step back and not make grand predictions. For us that’s ok because we focus primarily on market technicals and that’s an ever evolving picture that offers us pivot points to decide when and where to get engaged in.

But on the macro? Give me a break. Nobody knows anything. Everybody is just guessing.

Exhibit A: GDP forecast for Q2:

Ok great. How’s that helping anyone in trying to value companies, cash flow, revenues, earnings? It doesn’t. -9% is a completely different planet than -40% and so is everything in between.

How does one qualify central bank and stimulus intervention? It changes every single day. Today the Fed cranked out an international repo program. Global central banks unite I guess. Also today Donald Trump tweeted about a $2 trillion infrastructure program. Who knows if it will happen. The Fed already increased its balance sheet by $1.3 trillion since the same time last year and may well be heading toward $9  or $10 trillion balance sheet position within a year. Last week they added $600B, basically all of QE2 in a week.

These are insane numbers thrown around, all on top of the $2.2 trillion stimulus package just passed. What’s the deficit going to be? I guess it depends on whether GDP drops by 40% or 9%.

Give me a break. How do you make any forecasts that have a predictive meaning whatsoever in this environment? Other than a lucky guess, the answer is nobody. Why? Because nobody knows anything.

Which is really no surprise because because nobody knew anything to begin with:

…had predicted nobody on Wall Street. Not even close.

So take all predictions with a huge grain of salt.
Never stop thinking for yourself.

219 people are talking about this

What are the long term consequences of $4-$5 trillion in Fed intervention and perhaps $4 trillion in fiscal stimulus (which is short hand for more debt)?

Nobody knows. The MMT crowd will tell you it won’t matter because debt doesn’t matter.

Well, we can all take a stab at a joke here:

By the time this crisis is over. 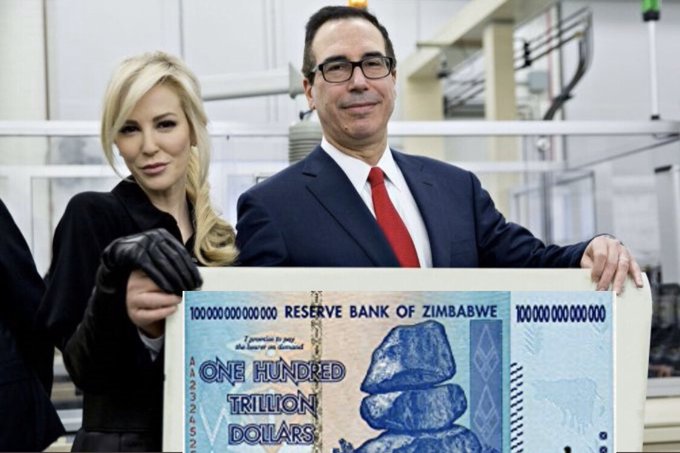 183 people are talking about this

What irks me more than anything is the hypocrisy of it all. Yes I could whine about politicians that once pretended to care about deficits but now no longer do, but that serves no purpose.

But the hypocrisy of Janet Yellen today is something else:

Easy Money Janet now complaining about too much corporate debt made possible by easy money.

Why are these central bankers never held to account for the consequences of their policies?https://www.wsj.com/articles/janet-yellen-says-too-much-corporate-borrowing-will-hinder-economic-recovery-11585603500 …

Former Fed Chairwoman Janet Yellen said bad choices by broad swaths of the financial industry and companies, abetted in part by low rates, are likely to make it harder for the economy to recover from…

“We’ve dumped rates into the gutter for the past 11 years and now we’re complaining about too much corporate debt” – Fed geniuses. 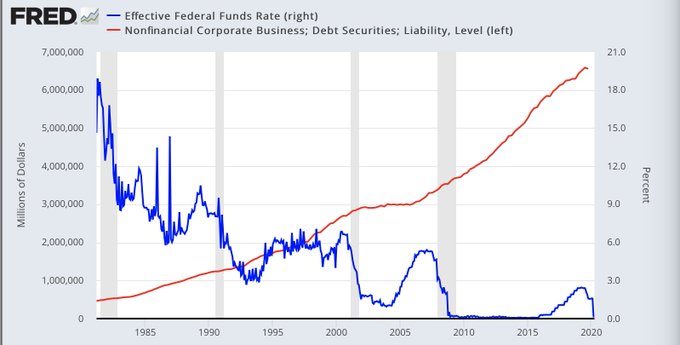 107 people are talking about this

Give me a break. For years the likes of me have been warning about the debt explosion and the consequences of which. And now one of the key enablers (may I even say architect) of the entire cheap money construct that enabled all this debt explosion in the first place is now warning about high levels of corporate debt being possibly a bad thing?

Too little, too late, and now they’re telling us all it’ll be fine. More debt. Yea, that’s the solution. It’s worked so well so far.

Coronavirus? Sure we can hope for the best and I, like everybody else, am hoping we will soon see the peak and it’s over by the summer and we can all recover. And while Italy and China and South Korea appear to be slowing the US, the UK and others have yet to reach their peak. And what does slowing really mean? That the virus is disappearing or just held at bay by our social distancing measures? If that’s the case then it may as well come back as soon as we relent on these measures. Do we have a cure? A vaccine? No, not yet. Yes we can hope for the best and that one will be developed, but but it may also not come in time for the next season, if this virus turns out to be seasonal. And if that’s case we get to do this all over again next year. But many will have immunity? Sure, if the virus doesn’t mutate.

Lots of unknowns, lost of uncertainties and lots of predictions. My view fwiw:

If half predict a strong and quick recovery and the other half predict doom and gloom we may just end up in an extended period of massive chop, uncertainty and wide price ranges.

83 people are talking about this

So treat all predictions by anybody with a huge grain of salt. Nobody knows anything.