END_OF_DOCUMENT_TOKEN_TO_BE_REPLACED

Another overnight coronavirus related scare as China had to greatly up its estimates of the infected, yet no worries, the market remains as much on autopilot as the Fed remains in denial about how their actions drive market behavior.

Call it denial, call it willful ignorance, call it outright lying as you choose.

Yesterday Jay Powell’s big whopper of course was this:

“There is nothing about this economy that is out of kilter or imbalanced”. Newsflash: No economy that is in fine shape and balanced would need this type of intervention:

Powell: “There is nothing about this economy that is out of kilter or imbalanced”.

The truth of the matter is the Fed’s intervention has, coronavirus related wobbles aside, eliminated 2 way price discovery and has pushed markets vastly above the fundamentals.

33 people are talking about this

But it does, and we continue to see these type of interventions to keep overnight rates from flying higher, which is exactly the sort of thing that would crush this high debt economy so dependent on low rates. And the continuous ascent in equity prices remains on a corollary path.

Then of course there is the whopper propagated by Fed types and apologists who claim Repo has no impact on assets prices. Nobody believes these blatant attempts of defending an indefensible claim.

Why? Because people are not stupid and we can see what happens when overnight REPO hits markets prior to US market open:

Every repo operation sees a run out higher out of the gate, more often than not with an overnight up gap and ramp, and if things just happen to gap down as today for example, just flip on the switch:

Your daily liquidity bomb:
When $40B are not enough do $78B the next day when futures are down. 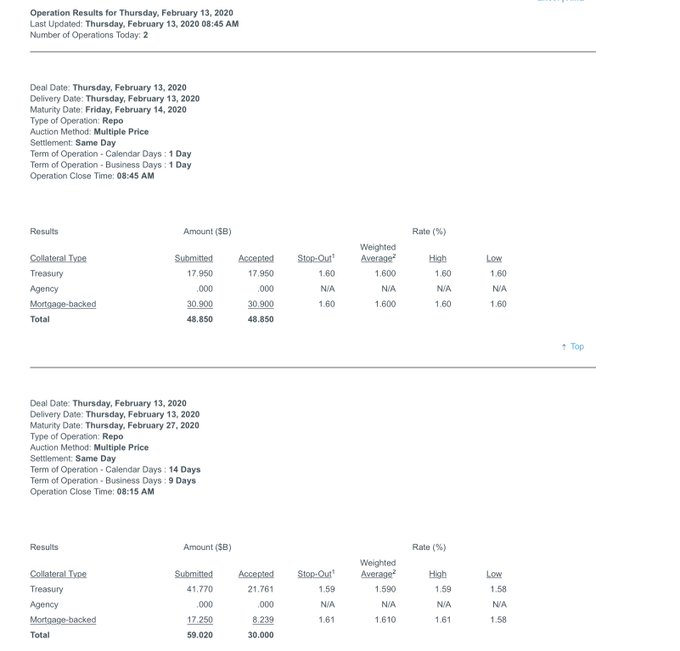 103 people are talking about this

Overnight coronavirus scare? No problem. $78B repo and off to the races higher we go to new highs again.

To get a sense of the lack of trust just look at the responses to Neel Kashkari’s (Fed governor) tweet yesterday:

Equities are being driven by low rates and a healthy economy, not central bank T-bill purchases.

330 people are talking about this

Not a word of support, he’s just getting hammered. Nobody believes him or Dudley. It’s a farce.

And the same in the responses from my tweet, even Guy Adami literally calling it “bullshit”:

299 people are talking about this

Nobody believes these blatant attempts of defending an indefensible claim.

Why? Because people are not stupid.

And indeed, one can note a negative  reaction today as the Fed announced it will be reducing repo operations:

But of course they remain larger and active.

I maintain the entire rally has been a Fed induced perversion. I mean just look at it:

Cautious stair step process on the attempt to normalize, and then a vertical chase back in on the way up.

And yes, it has impacted investor behavior and we can see it. A FOMO effect was created and people piling into tech like never before:

The Fed caused this and I regard it as a tragedy as they have created this massive asset bubble and now they are too arrogant to admit it and Powell is out there promising more and more intervention and calling it all wonderful and sustainable and how nothing in the economy is unbalanced. Empty suit policy I called it yesterday.

Just give me a break. No credibility, no trust, everything is distorted.

And so the market is on autopilot into the stratosphere with $NDX being over 400 points above its monthly Bollinger Band:

If you don’t like a linear chart feel free to do it in log, but it’s still the same: Over 400 points outside the upper Bollinger band. That type of extension has never lasted and has never been sustainable. Repo and treasury bill buying is causing participants to engage in risky buying behavior, not pricing in any risk where risk keeps building.

That works until it doesn’t, but in case of an emergency you don’t want to find out that the real pilot in the cockpit may be a dummy, oblivious to everything around him. And a Fed in denial of what they have unleashed here, denying that there are any imbalances, denying that repo has an impact on asset prices and investor behavior, such a Fed may be too deaf, dumb and blind to steer markets through the emergency that they themselves will have created by setting up asset prices for an ugly reversion to the mean.

Given the ever exacerbated state of technical extensions and valuations this market is becoming ever more dangerous in terms of downside risk. But for now it remains on autopilot. Yet so ingrained is now the one way ramp mentality that when this market finally does drop nobody will believe it.