END_OF_DOCUMENT_TOKEN_TO_BE_REPLACED

It’s that time of the year again when another exuberant rally gets too cocky, produces massive overbought readings as everybody is trampling long into stocks, is ignoring all the warning signs and then some outside event pulls the plug. Soon the downside will be again blamed on the algos that are never at fault for pushing stocks to extremes to the upside and soon all hopes will rest again on the Fed to prevent any downside getting too scary.

The Fed will have that opportunity again this week and can once again take cover behind the phrase “uncertainty” to stay “accommodative”.

Problem of course is that this time that the apparent trigger, the coronavirus, may turn into something more serious.

If it does then the Fed will be severely tested for one has to wonder if they left themselves exposed having already aggressively intervened:

Good thing the Fed has been prudent in preserving their ammunition to deal with a real crisis instead of blowing their wad with a bunch of rate cuts & a massive balance sheet expansion at the first sign of an earnings slowdown inspiring a big fat asset bubble in the process.

159 people are talking about this
Oh the hubris of it all. What if the Fed made a major mistake having been way to accommodative, exacerbating asset prices to the record tune of 157% market cap to GDP right in front of a major crisis? What if growth continues to slow as the bond market is suggesting? What if, gosh, it’s not different this time?

We can’t know the answers to these questions yet, but we can observe.

One of these observations points to a similarity in the monthly $NDX chart compared to the final rally run in 2007 versus now:

Is the Fed scared yet? 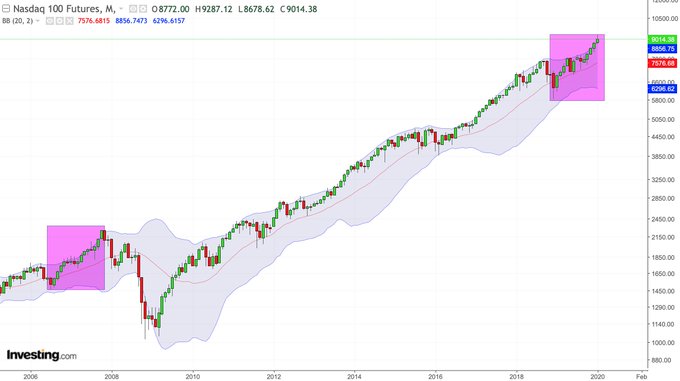 61 people are talking about this
That final exuberant rally that ignored all warning sings, the final rally that makes bears look stupid and bulls exuberant.

Again, too early to tell, but the similarity is there.

What can be said with certainty for now is that the uptrends since the Fed gunned markets higher with liquidity in October have been broken. On all the major index charts.

And we can observe that the $NDX sell signal has indeed produced downside:

Trend breaks often times precipitate larger drops. They don’t exclude the possibility of further rallies or even new highs on occasion. After all markets are becoming short term oversold and the Fed will take center stage this week and lots more earnings are coming out.

Markets overshot to the upside and now they are paying the price and are at risk of having made a sizable short term top. Two down days not a bear market make, but every top starts somewhere.

Just a week ago people were gleefully calling for $DJIA 30,000. Suddenly the $DJIA is nearly 1,000 points lower. Wall Street kept telling people to buy. Nobody said to sell.

And poof, most of the gains in 2020 are gone with several indices now running negative on the year:

Whether this all turns into just a short term correction or something more meaningful remains to be seen. I’ve questioned the sustainability of these price extensions above the underlying size of the economy:

Especially in context of a broader earnings picture that appears to have favored financial engineering via buybacks and a central bank included TINA effects versus actual substance:

For now we have technical trend breaks on a highly valued market with suddenly a lot more uncertainty ahead then just a week ago. Things have changed.