END_OF_DOCUMENT_TOKEN_TO_BE_REPLACED

It’s a dirty job and someone has to do it. May as well be me and I’ll make the bear case here as difficult as it is. And I say difficult, because it is. I think I’ve been very consistent on this point: The dividing line between the bull and bear case are central banks and their efficacy in interfering in markets and managing to re-inflate growth once again, prevent a recession and keep all sell-offs contained.

Following the 20% correction last year central banks have managed to do just that, prevent larger sell-offs. In doing so they’ve pushed markets on a path of multiple expansion. And this remains the bull case. Continued multiple expansion.

There’s an old adage, “don’t fight the Fed.” Means that if the Fed is on a tightening course, don’t be long. And if the Fed is lowering rates, as now, don’t be short. Doesn’t always hold true, but often enough to ignore. The Fed has a lot of tools to achieve its objectives.

276 people are talking about this

The tweet is an implicit acknowledgement that central banks drive equity prices. Full stop.  And they have done so again in 2019 and they continue to do so by fully intervening again and markets keep reacting to it, and the obvious chink in the bear case is that, if they succeed again, there is no bear case. Fully acknowledged, especially now that we are clear on this point:

Central bank intervention has become permanent.
It will never stop now.
They will never normalize.
Why? Because they can’t.
The global financial system cannot stand on its own.
Blowing ever higher asset bubbles is the only choice they have or risk an epic unwind.

232 people are talking about this

So the bear cases rests on central banks losing control. Are there any signs of this on the horizon?

Consider: September’s market gains were once again inspired by trade optimism and a front run into central bank meetings. The ECB cut rates and announced QE, the Fed cut rates and suddenly found itself in repo panic mode, totally caught off guard by a sudden jump in overnight funding rates as markets ran into liquidity issues. And what turned into a one time operation, turned into 2, 3, 4 days and now has become a regular scheduled program into October with much larger reaching consequences:

Powell signaled the Fed was likely to allow “organic” b/s growth. BofA estimates the Fed needs to boosts its assets by $400 bln over the next year followed by $150 bln per year afterwards to keep up with organic growth. That would bring the B/S near pre-QT levels pretty fast 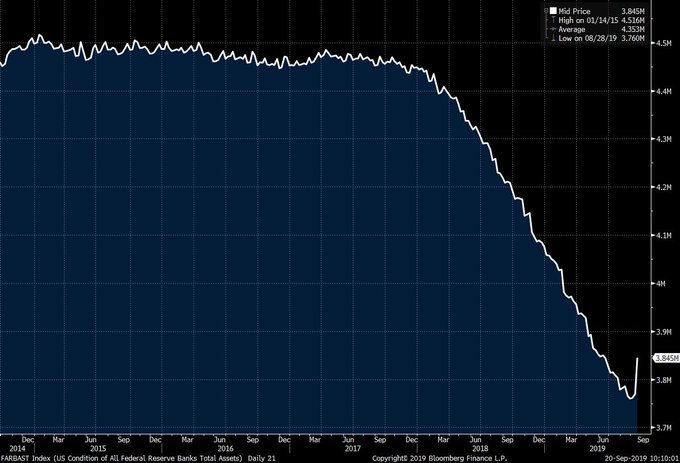 So much for the balance sheet roll-off. Bears have been absolutely right on this, it was always a fantasy and central banks will keep inflating balance sheets because without natural market forces would demand the great unwind.

This is the market forcing the Fed into action. This is exposing the Fed to be surprised by market realities. This is suggestive there may be more things going on than the Fed is willing to admit to, either to itself or to the public. I’ve highlighted similarities to 2007 this week in the language as well as in the economic backdrop.

And hence it was notable when Jame Bullard of the St Louis Fed came out yesterday and actually highlighted the risks that Powell left unstated by saying markets shouldn’t ignore recession signals:

“First, there are signs that U.S. economic growth is expected to slow in the near horizon. Trade policy uncertainty remains elevated, U.S. manufacturing already appears in recession, and many estimates of recession probabilities have risen from low to moderate levels. Moreover, the yield curve is inverted, and our policy rate remains above government bond yields for nearly every country in the G-7”.

No, for Bullard the yield curve actually matters. Tick tock as I called it: 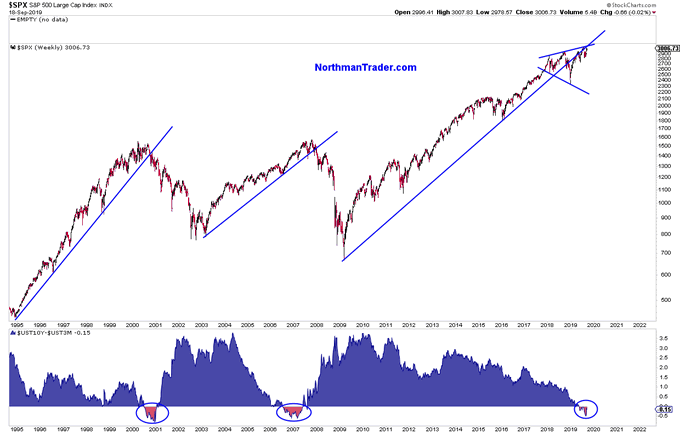 316 people are talking about this

But markets are ignoring recession risks, they are ignoring multiple expansion, they keep running toward central bank meetings and hope for a trade deal that may never come. Fool me once shame on you, fool me 100 times shame on you. How many times will markets fall for trade optimism headlines?

There still is no trade deal and Friday’s pullout by the Chinese from attending agricultural meetings in Montana and Nebraska speak to continued issues in the negotiations. But hope dies last.

Look, I’ve been very consistent on this: For new highs to be convincing, they need to be sustained and the previous laggards need to be breaking above their respective resistance points.

Well, we not only don’t we have new sustained highs we don’t have new highs period, and none of the laggards have broken above their points of resistance. The Fed cut rates in July as we had approached the Sell Zone, markets fell from there, now the Fed has cut again following the ECB cutting as well. New highs to come were advertised by bulls all over the place. Hasn’t happened. In fact, as of Friday, the Sell Zone was again rejected as $SPX closed below 3,000 on Friday.

And because new highs haven’t happened bulls are now staring at a potential failure of epic proportions: The dreaded DT’s, no, not the delirium tremens, although it may lead to those eventually ;-), but rather DT’s as in double tops. Weekly double tops, monthly double tops.

Whereas before bulls needed to make sustained new highs, they now absolutely must make new highs or else.

To follow up on an important conversion, technicals and central bank efficacy, I’ve stated clearly that, following the 2019 trend break and rejection off of the megaphone trend line, bulls needed to repair technical damage and break above the megaphone pattern and repair the broken 2019 trend by lift everything up.

The September trade optimism rally has indeed  lifted things up, but it hasn’t repaired the broken trend and it has so far failed to make new highs or break above the upper megaphone trend line. If anything this recent price action is suggestive of a potential failed backtest:

And this means bulls haven’t proven anything yet. All they’ve done so far is ride the Fed’s coattails and hope they remain in control, especially now that multiple expansion is all they have run on. But neither have bears proven their case. What bears need to do now is take advantage of failed new highs and start filling some gaps below:

As I’ve also outlined multiple times before, markets, despite all the noise, remain engaged in a typical pre-presidential election seasonal pattern:

This pattern suggests mid September market strength is a sell and further volatility and downside is to come before a standard year end rally can emerge. And this may still be the script and bears have to invalidate it, hence I mentioned the bear case is difficult and bears may be running out of time.

Yet I maintain what I said last week: At 144% market cap to GDP US markets remain priced to perfection in an increasingly imperfect world making markets accident prone to unexpected events. Markets need sustained new highs or face technical consequences.

What’s the bear case then? It’s in the technicals and it suggests that last week’s failure to make new highs could set up for quite a different picture in the next few weeks: