END_OF_DOCUMENT_TOKEN_TO_BE_REPLACED

This week’s renewed move above 3,000 on $SPX prompted victory laps by bulls as the multiple expansion program inspired by central bank intervention and trade optimism once again dominated the market action. Whether these victory laps were justified or were rather pre-mature remains to be seen. From my perch bulls are playing with fire as stock market capitalization to GDP once again exceeded 144% by Friday’s close making markets accident prone to unexpected events. The unexpected weekend event of one of Saudi Arabia’s key oil production facilities getting hit by a drone attack shutting down a significant portion of its oil production being a possible example.

Hope is that any production shutdown will be fixed in short order and whatever happens in the next few days in oil markets will not have a lasting impact. That may well be the case, but the event imposes a new element of political uncertainty onto a fragile global economic backdrop that can ill afford any accidents or mistakes.

Bulls are counting on central banks to fix everything again as in 2012 or in 2016. Continued efficacy of central bank intervention at this stage of the business cycle is indeed key to everything and an open question. So far central banks indeed look to retain control as equity prices once again appear well protected from any slowdowns in economic growth and earnings. I remain of the variant view that all these efforts are an expression of policy failure and that these desperate efforts will eventually fail miserably.

My perspective on the recent rally: Four main factors.

Keeping it in its simplest form the rally can be viewed as a simple front run into the big central bank meeting in September. The ECB was expected to cut rates and re-introduce QE and hence $DAX rallied for 3 weeks straight right into resistance back testing its broken wedge:

And of course US stocks rallied right into the US Fed meeting scheduled for this coming week as well. Two big central banks offering intervention is a carrot hard to resist for bulls. And as most Fed meetings are viewed as positive triggers for market gains this rally was simply a front run on the expectation of easy money greatly aided by additional factors:

Bonds were historically overbought and we saw a technical reaction off of the most overbought weekly bond RSI readings in history:

Is it a long term bottom in yields or simply a corrective move before heading to lower yields eventually? We’ll get a sense of this when $TLT hits some basic technical retrace levels, the .382 fib being one of these potential pivot points. Note that fib now shows confluence with the 2016 high of $TLT, if it now proves support $TLT may bounce off of there and resume its ferocious uptrend. A key chart to be watched for sure.

Banks and small caps of course benefited from this reversal in bonds and put in fierce rallies as a result:

None have broken out of their respective ranges, but have clearly put in a chink in the bear argument, that of lack of broader market participation. The recent rotation out of growth momentum into value could be viewed as shift in the market structure, but one which could have lasting consequences as big cap stocks have dominated the landscape for so long and hence the short term relief may turn into long term pain as the market’s valuation equation is so closely intertwined with extreme market cap concentration just a few stocks.

But note on the $RUT chart a structural pattern on its underlying volatility index. It’s a key indicator to watch which brings me to the 2nd factor in this rally:

This coming week is September OpEx (quad witching) and also expiry of the monthly $VIX futures contract, and volatility compression into the monthly expiration has been a regular part of the market structure:

And this month has been no different, yet $VIX retains its pattern of higher lows in 2019 and could well be on the ascent again following this pattern of compression. The first test of this will come on Monday following the drone attack on the Saudi oil production facility.

The timing couldn’t be more interesting, after all it could be argues that the recent rally simply backtested the broken 2019 trend while compressing $VIX to the bottom range of its flag pattern:

Ironically this backtest has an eerie similarity to the fall of the 2018 when $NDX did precisely the same thing, backtesting its broken wedge then:

What was then a cause for victory laps turned into a valley of tears as this backtest marked the top for 2018.

Note also the repeat pattern of wedges that ultimately fail and this rally here is no different which bring us to the final factor behind the rally:

We’ve seen a multitude of trade optimism inspired rallies this past year and a half, any sign of easing of tensions and markets rally. How worried are markets about trade tensions at this point? With $SPX near all time highs I submit not very, but they should, because there is likely not to be a trade deal of size or consequence. It is no accident that the idea of an interim trade deal was trial ballooned this week. Why? Because they know they can’t agree on the big issues: 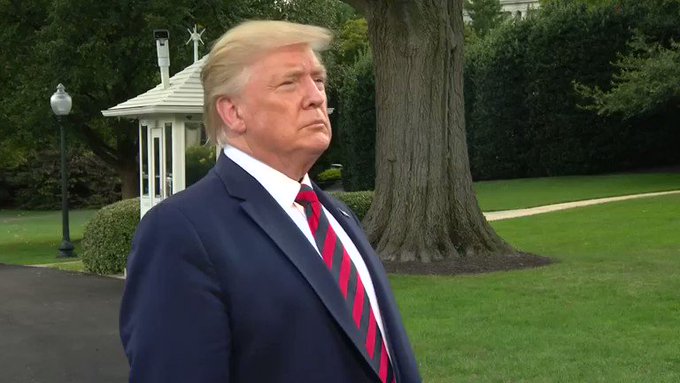 108 people are talking about this

And will an interim trade deal be enough to cause companies to re-invest? Doubtful. It may be enough to inspire a year end rally, but it will not be enough to address any of the major issues and likely disappoint many of the supporters for the trade war in the first place.

But because the rally was again headline driven and not substance based we again see a rising wedge and many open gaps below on the charts:

Not only do we see many open gaps note last week’s rally stopped precisely at the 3020 gap left open in July on the heels of the Trump tariff tweet.

September 2019. A Fed meeting on September 18 expected to cut rates and declaring little to no recession risk and a president calling for zero rates or lower and the re-launching of QE.

Irony is like the gin in the campari, the cream in the coffee Christoper Hitchens once opined and one can’t help but be impressed of the irony of history aligning here.

For not only was it a September 18 when the Fed was going through the same motions as it is now:

Next week FOMC announces their next decision on September 18, 2019.

129 people are talking about this

..but it was also a September when a certain someone called the Fed’s intervention efforts a form of manipulation intended on creating artificial numbers for short term gains:

245 people are talking about this

Oh yes irony, the creme in the coffee.

But that’s not all: In 2007 the September rate cut produced a rally that lasted 3 weeks before it was all over. The irony for me? It was the early October time frame that I suggested as a potential point of technical combustion back in April with this chart:

Bottomline: From my perch bulls have been and continue to play with fire and can’t afford a single misstep.  The winds of intervention via central banks remain in bull’s favor as does the continued efficacy of “trade optimism” jawboning. As long as this remains the case rallies can continue to push the wall of valuation toward unprecedented territory, but resistance remains (measured move), multiples keep expanding and earnings growth continues to decline.

And hence the Fed’s action this week absolutely must produce new highs on markets this week. If they don’t Powell and crew will stare at a 2nd failed break above 3,000 following its 2nd rate cut action in this cycle. And then what are we looking at ? A double top? No bull market despite repeated central bank intervention? And now a Fed with even less ammunition than before and nothing to show for?

As I said: Playing with fire. Sustained new highs are imperative here or this all looks like a failed backtest on the charts and recent compressed volatility could come back with a vengeance and bull victory laps will turn into a valley of tears. But there’s always a silver lining in bad news. Will the new geopolitical uncertainty be a cause for the Fed to suddenly cut by 50bp? We will know more on Wednesday.