END_OF_DOCUMENT_TOKEN_TO_BE_REPLACED

It’s finally official. QE Infinity is here, so announced today by Mario Draghi at his final press conference as the head of the ECB. Not only QE, but also joining Turkey and Denmark as the latest countries to cut rates this year. Just today and many more to come.

I’ve opined on the subject quite a bit on twitter already today, but what happened today deserves some additional points to be made, mainly because of the intellectual bankruptcy permeating our entire market structure.

Let’s start with the main point:

Since nobody will say it I will:
Launching QE and cutting rates to further negative 10 years after the financial crisis ended is a giant policy failure.
These measures never fulfilled the promises made.
The construct is held up by crisis intervention measures.
That’s it.

211 people are talking about this

It’s the point critics of these policies have been predicting for years. Permanent intervention is needed to hold the construct up. These policies never went everywhere. Whatever inflation or growth targets were promised never materialized. Whatever promises of normalization were made never came to fruition. All lies and false promises.

Year after year central bankers have come out, made promises and projections only to push them further into the distance and kept pressing the dovish button. Mario Draghi being the worst offender.

Draghi never raised rates and never normalized the balance sheet.
Didn’t even try.
All he did is print, pause and it blew up in his face.
And now he’s printing again on his way out.
He should be booed out of the press conference.

125 people are talking about this

Draghi: Negative rates have been quite a positive in stimulating growth.

91 people are talking about this

Inflation expectations (the stated goal of his policies) have trended down ever since the financial crisis.

Let’s add QE to the mix and whaddya got?

Growth? In what? GDP?

Trending down and like the US on an ever slowing path from cycle to cycle. That may not be Draghi’s fault. Demographics, technology, a messy conglomeration of nations trying to operate a common union and currency. Nobody can blame Draghi for that. What one can blame Draghi for is the utter dishonesty of it all making claims that are simply not true.

Negative rates have not produced growth, more likely they have hindered growth. Check the European banking sector if you don’t believe.

Heck, check the ECB’s own GDP forecast for the next 3 years:

That’s what you get with QE infinity and negative rate infinity. Nothing. 1% growth. Congrats.

So an outrageous statement to make. But worse than the statement: None of the reporters present challenged Draghi. He never got challenged by reporters during his tenure, just submissive note taking, moving onto the next question adding no value all the while seeing his promised not come to fruition.

And so Draghi leaves office with a perfect dovish score of 4.68 trillion Euro with a policy of QE infinity on the table for his successor Christine Lagarde to not only embrace but to double down on.

Why am I ranting and complaining about all this?

Well, for one, I don’t like being lied to and a concerted effort of deception is what the entire central banking cabal is engaged in during every policy meeting and press conference as they keep dancing about a key truth: With a fragile global economy the world is one confidence sapping 10%-20% market correction away from triggering a global recession. Central banks know this. Preventing this is the prime directive. Everything else is noise.

And unaccountable to policy failure they keep doubling down on policies that have prompted record wealth inequality spurred not by growth in the larger economy but by growth in vast asset price inflation benefitting the very few:

Earnings forecasts? All off: 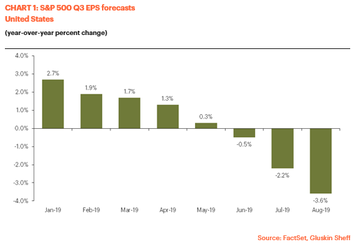 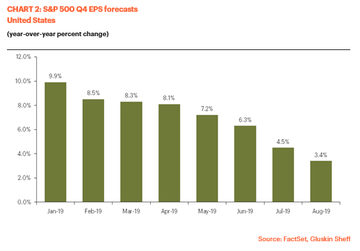 67 people are talking about this

Look, anybody can be wrong. I’ve been wrong. Bulls were massively wrong in 2018 and frankly they are wrong again in 2019 for the reasons I outlined. But then say that you were wrong and say that you are entirely reliant on central bank intervention to bail out the overstated earnings forecasts. At least that would be honest.

And I repeat: No bull market without central bank intervention. And this is precisely what bulls are counting on, that the almost recession can be averted agin like in 2012 and 2016:

And what, precisely, prompted these “resets”? Central bank intervention. In 2012 it was the Fed’s QE3, in 2016 it was the combined efforts of global central banks leading to $5.5 trillion in intervention. And now bulls are counting on these intervention programs to succeed again.

But of course there may be a problem or two:

First we’re coming from rock bottom to start with which raises the unanswered efficacy question I keep wondering about?

But ignore yield curve inversions at your own risk:

Come on. Get real. QE infinity will not produce growth and neither will more negative rates. At best they can hope for is prevent a major market sell off to trigger a confidence bust leading to a recession. But the jury on this remains out. All new highs over the past 18 months have been sold.  All highs have come on central bank promises. As we are making new highs on the heels of the ECB decision and perhaps the Fed next week the question of efficacy will reveal itself. Failure is not an option for central banks. Question is how much longer investors will be contented with being lied to.