END_OF_DOCUMENT_TOKEN_TO_BE_REPLACED

The repo market problem isn’t the problem. It’s a sideshow, a diversion, and a joke. It’s a symptom of the problem. Today, I got a note from Liquidity Trader subscriber David, a professional investor, and it got me to thinking. Liquidity moves markets! Follow the money. Find the profits!  Here’s what David wrote: Lee, The…

END_OF_DOCUMENT_TOKEN_TO_BE_REPLACED

Fed Not QE has as much to do with a plumbing issue as a plumber’s crack has to do with an overflowing septic tank.

END_OF_DOCUMENT_TOKEN_TO_BE_REPLACED

Here’s an update of “It’s So Not QE,” brought to you by the good folks at the Federal Reserve, providing welfare programs for crooked bankers and other economic parasites since 1913. This is an embellished excerpt from Liquidity Trader’s Here’s Why The Fed is Trapped. Liquidity moves markets! Follow the money. Find the profits!  As…

END_OF_DOCUMENT_TOKEN_TO_BE_REPLACED

Let’s look at a few of Chairman Pow’s words at yesterday’s press conference. Please read them and tell me whether this sounds to you like a man who doesn’t understand what he’s doing. Or if you think he’s deliberately pulling words out of his ass, stringing them together, and spewing them from his mouth in…

END_OF_DOCUMENT_TOKEN_TO_BE_REPLACED

Not QE is ramping up.

END_OF_DOCUMENT_TOKEN_TO_BE_REPLACED

In this weekend’s market update I want highlight a few observations that crystalize a theme that has emerged in this market: It keeps repeating key structures and patterns as it’s fighting a battle for control and the outcome of this battle will ultimately determine everything.

Let’s start by taking note of some key developments in the last few weeks.

Firstly in July markets went on to break out toward the Sell Zone which we’ve identified as a potential key market pivot. As it turns out markets repeated precisely what they did last year: New highs were not sustained and the breakout has failed. Again.

Last week’s flush was actually quite intense, especially in the after-hours session on Monday. $ES ended up dropping 8% from the highs in a matter of a few days. This sort of bottom falling out should concern everyone about liquidity. Like in 2018 there was zero support built on the way up in June and July, price levels were simply sliced through before the oversold bounce emerged.

Note these markets have been acting in confines of very precise structures, channels and patterns and they keep repeating themselves. And we can see this in many index charts and products.

Here’s the $DJIA as an example:

And almost a like for like replay of the initial October correction which of course raises an important question: Will history repeat itself?

Note the $VIX of $VIXplosion fame has been replaying patterns over and over again and is acting very technically as we saw the outlined $VIX 24/25 target get hit perfectly last week with an immediate reaction from there. These patterns and targets provide massive edges for active participants to decide when and were to react and get engaged:

Market of the open gaps.
Many, if not all, will fill in due time.$SPX

45 people are talking about this

And so markets keep following key structures as volatility is building a rising trend:

As you can see in the chart above $SPX also follows structures cleanly and showed a strong reaction off of that broadening wedge trend line we’ve been talking about for months and I’ve added the 10 year yield in comparison in the updated chart below:

Note the 10 year yield has given back the entire run since the US election in 2016.

Bonds have been sending a message of slowing growth since October when the 10 year peaked at 3.25% and growth optimism was all the rage. The 10 year has been cut nearly in half since then.

While investors may take comfort, as they have in the last 10 years, that any ‘accidents’ are quickly reversed. Monday’s flush was so fast and deep it created steep oversold conditions which brought about the fierce bounce later in the week, aided and abetted by a flurry of corporate buybacks that keep putting the wool over investors’ eyes.

But all these buybacks (running on a cumulative pace of $2 trillion or so between 2018 and full year 2019) can’t hide a notable fact: Markets have gone nowhere since that January 2018 taxcutgasm.

Still held up by tech and tech alone, the broader sector performance since those January 2018 highs is rather mediocre at best and abysmal in many cases.

If the bond market is signaling that the growth optimism priced into markets since the US election has been misplaced what could this imply to stock markets?

For the answer to that question perhaps it may be worth looking at the weaklings underneath these markets, the ones I’ve been pointing toward all year, small caps, banks, transports:

Driven by large cap tech $SPX rallied away from these indices masking the underlying weakness. These sectors are not confirming new highs on markets and keep pulling from underneath. Their charts are dreadful, having lost their 200MAs again last week and confirming the channel/flag structures that have been building in the last few months:

None of these have gone anywhere in the past year and half. There is no bull market there. Bulls keep telling people to buy stocks in anticipation of Fed induced multiple expansion. Well, where is it? The recent rate cut, long anticipated, has done nothing for these sectors.

And so here we are:

The chart says we had another failed break out to new highs, we became oversold on the fast and steep reversal and we tagged the 50MA twice on the subsequent bounce and failed to close above it. $SPX is 0.31% above the January 2018 highs. It only took what? $1.5 trillion or so in buybacks since then and a complete capitulation in Fed policy and a rate cut. Impressive? Surely not.

Looking at the entire picture, perhaps this market is only one shoe drop away from coming to terms with what the bond market has has been signaling all year: The end of a cycle:

Unemployment looks to be the last shoe to drop.
Once that changes direction everything else will fall apart.
The bond market is screaming.
Is anybody listening? 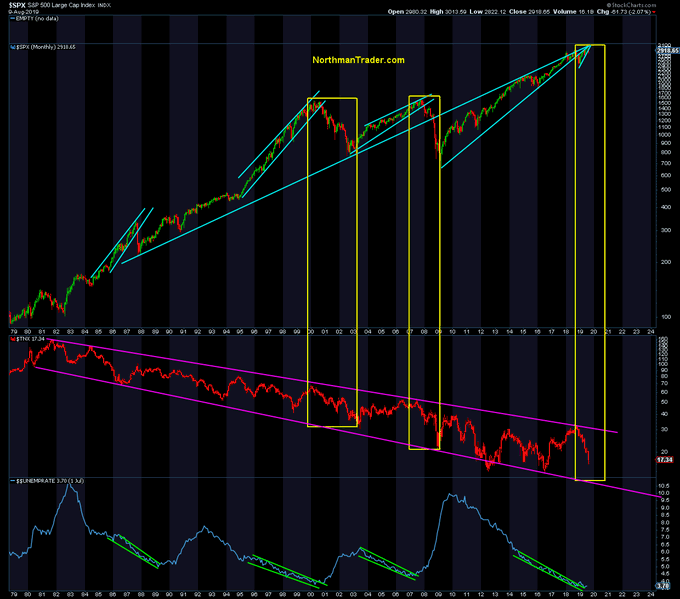 156 people are talking about this

We can’t know until the data confirms it. From my perch markets remain engaged in an epic battle for control, central banks desperate to keep extending the business cycle with intervention, corporate buybacks systematically reducing share floats to keep the illusion of earnings growth going, and a political apparatus trying to control markets with jawboning and exerting political pressure on the Fed to cut rates further as currencies, bonds, commodities and fundamentals show a market under increasing stress. As of now $DJIA is back below the January 2018 highs, the broader $WLSH is back below the September highs.

For the immediate time horizon markets are at risk of seeing a technical replay of 2018. Failure to recapture 2,950-3,000 is not an option, otherwise we can see a retest of recent overnight lows around 2780 and potentially move into 2700-2750. A break below risks the broadening wedge to fully trigger and eventually target the 2100-2200 zone on $SPX which makes sense in context of the historic market cap to GDP ratios. Institutional forces want markets higher and remain an important driver of rallies in the face of deteriorating data. Yet charts show a building theme of stress, rising volatility and failed breakouts. And that’s the theme that permeates the landscape.