END_OF_DOCUMENT_TOKEN_TO_BE_REPLACED

Are we hitting the wall here? Markets. Economy. Technicals. Valuations. All appear at a key crossroads here. Last week’s 3% pullback, while in itself not seemingly dramatic, came at a very key point. Whether it is meaningful is too early to tell, but I have some eye opening data points for you that suggests it may very well turn out to be extremely meaningful.

In last weekend’s update (End Game) I highlighted the issue of market capitalization versus the underlying size of the economy. Let me dig a little deeper.

Is there a natural wall beyond which bubbles cannot go before they revert back to a more natural state of valuation? It’s a serious question especially looking at the structural context of the last few bubbles. The biggest bubbles in our lifetimes were the 2000 tech bubble, the 2007 real estate bubble and the monstrosity we are witnessing now, the central bank, cheap money bubble.

All 3 have done something unique. They have vastly accelerated asset prices above their historic track record. In 2000 and 2007 these bubbles moved stock markets wildly above the mean and investors got punished badly. This is the chart I showed last week:

Peaks of 147% and 137% respectively. Now this bubble has arrived in full vengeance on the heels of $20 trillion in central bank intervention, a global collapse in yields and the TINA effects.

Now look closely what just happened in the past 18 months:

We keep hitting the same wall. January 2018 nearly 150% market cap to GDP and stocks got punished with a 10% correction.

Last September/October we hit a slightly lower high around 147% and stocks got hit with a 20% correction.

Now in July we hit 145%, another slightly lower high, and stocks have begun selling off again.

Is that it? Is that the valuation wall? How far and for how long can stock markets stay this far disconnected from the underlying size of the economy? All of history says: Not for very long.

Incidentally, why these slight lower highs? Because the larger stock market is weakening underneath from new high to new high. It’s what I’ve outlined with divergences and weakening participation, but neatly captured by the value line geometric index:

But the plot thickens.

The earth is not flat, despite some adherents to that fantasy, the same valuation wall can be observed across the globe (via Wordbank):

Each time market capitalizations cross the 110% mark things get iffy don’t they? Added plot twist: The world can lead in the realignment to reality process. Note the global valuation scheme peaked in 1999. US markets famously puked some more highs out into March of 2000. Well, this time around the world peaked in 2018 and since then it’s the US again squeezing out marginal new highs in 2019. Not Europe, not Asia, no, it’s the US on its own.

The earth is not flat.

The bull case from here is based on one factor alone: The Fed. I see it in every Wall Street case for new highs. The Fed is cutting, you must buy stocks. That’s it. It’s not earnings, not growth, no, Goldman is cutting earnings and growth, but raising price targets because of the Fed.

I submit to you that, while this may indeed come to fruition, it is structurally a reckless thing to do. For 2 reasons, both of which are predicated on the same thing: History.

There is no history, none, that supports stock market capitalizations above 145% of GDP for an extended period of time. None.

There is also no history, none, that’s suggests unemployment can stay this low for an extended period of time. None.

And their certainly is no history suggests that BOTH can be maintained for an extended period to time concurrently:

None. But you are welcome to believe it if you wish.

And hence, in context, Jay Powell’s comment about a ‘mid-cycle adjustment” was either disingenuous, ignorant or an outright lie.

Looking at the yield curve, the reaction of the 10 year off of the 30+ year trend line and the basing of the low unemployment rate, does any of this suggest anything remotely close to mid-cycle? I submit to you that they don’t.

And switching to technicals, look at the trend lines in the $SPX chart above: The 2009 trend line STILL remains broken. I submit to you they jammed stocks higher in 2019 on the Fed pivot, the flip in policy, the promises of a rate cut, and the delivery of a rate cut, aided by still massive buybacks in the system. That’s it. They haven’t changed anything substantive on the economy. It’s still slowing, we still have trade wars and earnings growth remains flat to negative and there’s no growth in CAPEX or business investment.

Previous business cycles came to a sudden end when the employment picture changed trajectory, from a period of basing at the low end to shift to higher unemployment and a sudden steepening in the yield curves:

And guess what? Everything, the yield curves, the stock market valuation to GDP ratio at 145%, the Fed pivot, it all has led to here:

The magic 2.618 fib zone on $SPX (we missed it by a few handles) and exceeded it temporarily on the $DJIA:

We’ve hit walls everywhere. Technically, economically, valuation wise. To trust the Fed and to go long stocks here is to believe that none of these walls mean anything.

That’s a lot of believing.

I prefer seeing. And here’s what we just saw. We saw a market enter a technical risk zone that was outlined in advance:

Sell Zone: Pushed higher by hope and optimism in the face of deteriorating fundamentals markets are approaching a key sell zone.https://northmantrader.com/2019/06/30/sell-zone/ … 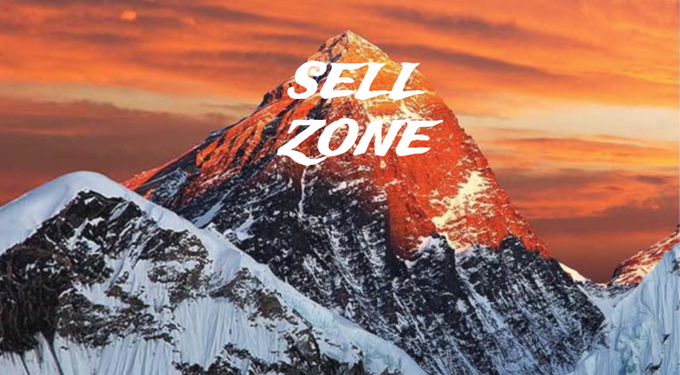 And we saw market cleanly rejecting from that risk zone:

That doesn’t mean immediate confirmed doom and gloom, certainly not with a mere 3% from from the highs, but it speaks to the impressive confluence of technical and valuations factors that suggest that markets may be hitting the wall.

For a run down on the technicals and implications please see the video below: