END_OF_DOCUMENT_TOKEN_TO_BE_REPLACED

The repo market problem isn’t the problem. It’s a sideshow, a diversion, and a joke. It’s a symptom of the problem. Today, I got a note from Liquidity Trader subscriber David, a professional investor, and it got me to thinking. Liquidity moves markets! Follow the money. Find the profits!  Here’s what David wrote: Lee, The…

END_OF_DOCUMENT_TOKEN_TO_BE_REPLACED

Fed Not QE has as much to do with a plumbing issue as a plumber’s crack has to do with an overflowing septic tank.

END_OF_DOCUMENT_TOKEN_TO_BE_REPLACED

Here’s an update of “It’s So Not QE,” brought to you by the good folks at the Federal Reserve, providing welfare programs for crooked bankers and other economic parasites since 1913. This is an embellished excerpt from Liquidity Trader’s Here’s Why The Fed is Trapped. Liquidity moves markets! Follow the money. Find the profits!  As…

END_OF_DOCUMENT_TOKEN_TO_BE_REPLACED

Let’s look at a few of Chairman Pow’s words at yesterday’s press conference. Please read them and tell me whether this sounds to you like a man who doesn’t understand what he’s doing. Or if you think he’s deliberately pulling words out of his ass, stringing them together, and spewing them from his mouth in…

END_OF_DOCUMENT_TOKEN_TO_BE_REPLACED

Not QE is ramping up.

END_OF_DOCUMENT_TOKEN_TO_BE_REPLACED

Do investors recognize how much risk they’re taking on at this stage in markets? I think it’s a highly relevant question as things may not be as well as they seem. On the surface all looks well as markets just made new all time highs in July and big cap stocks such as $AAPL are near trillion dollar valuations and show strong balance sheets.

But there’s something insidious going on underneath the valuation equation and that is: Investors are paying higher and higher forward multiples not realizing that they do.

Why? Because corporate profits are actually not expanding. Not only are they not expanding they’re shrinking on an aggregate level.

What if I told you corporate profits before taxes actually peaked in 2014, 5 years ago? Really, it is true:

And if you look closely you realize that this a trend that happens preceding recessions. Now this trend can last a few years as it has now, or in the period in the  mid 90’s leading to the 2000 top, or it can happen more quickly as in the 2006 – 2007 time frame.

But note, this decline in corporate profits presages the end of a business cycle, i.e. an upcoming recession, but markets tend to keep rising until that happens:

Why don’t markets react to this decline in corporate profits? The last cycle and this cycle in particular give a clear answer: Buybacks.

Even more so now than in 2006-2007 we are still in a very aggressive buyback cycle and this form of financial engineering masks a lot of things.

Here’s how I explained it on twitter the other day in reference to a chart about how earnings growth has come to a halt: 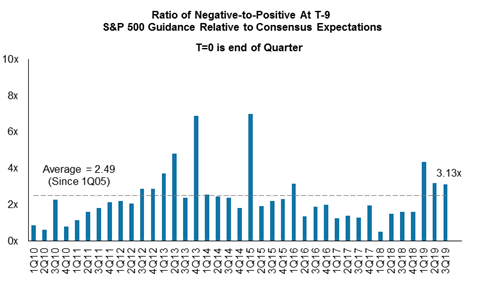 231 people are talking about this

And here is how this translates into risk to investors. Take $APPL.

The company  is trading around $200 these days, nearly double the level it was trading at in 2015. Why is 2015 relevant? Because $AAPL’s earnings were exactly the same as they are now: Around $53B.

But what did they do? They bought back shares since 2015. Lots of them. 1.2 billion shares to be precise. The net effect:

What’s that mean for investors? Well, you’re paying a near double premium in share price for a company that hasn’t grown earnings in 4 years. That’s called multiple expansion. $AAPL’s forward earnings multiple in 2015 was 11-2, now it’s near 17. That means you’re taking on a lot more risk than in 2015. In fact the multiple expansion is between 45%-55%.

Who says there’s no inflation?

And it’s not only with $AAPL, it’s common across the board. So investors be aware: You’re taking on a lot more risk in paying for shares either directly or in ETFs and index funds, especially at a time when market valuations to GDP have exceeded 140%. Buyer beware.