Amidst All The Noise, Chart Structures are Unmistakable | The Wall Street Examiner - Unspinning Wall Street ™

END_OF_DOCUMENT_TOKEN_TO_BE_REPLACED

Let’s step back and de-noise. Just focus on some key charts. I don’t want to overwhelm you with too many charts, but I’ve picked some select charts I think everyone should have on their radar because they tell a tale, a tale of the true state of markets. And I could show you a hundred charts and some will say but what about this chart or what about that chart. Feel free to chart them, but it’s these charts here that have my particular attention because they tell an important story.

Many of you have seen some of these charts as I discuss them frequently in my weekend updates, but I’ve added a couple of additional perspectives and give you some updated comments in context of the current correction.

Let’s start with the $WLSH, the all market index:

On August 8th I had posed that we may see a repeat of the Fall of 2018 structure:

History doesn’t repeat, but sometimes it rhymes?
Time will tell.$DJIA 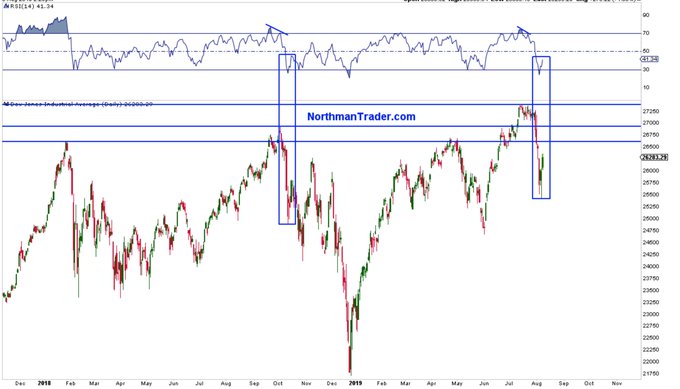 119 people are talking about this

Whether it plays I can’t say, but so far it has shown a similar structure. We can note that the $DJIA, like the $WLSH, is having problems and is below the January 2018 highs and is currently playing footsie with its 200MA:

But also note the broadening wedge on it. It’s in essence a smaller version of the same structure we see on the larger $SPX chart:

These are very clean structures, I’m actually very impressed by how clean they are. And because they are so clean bulls have to be concerned by that wedge break that has just occurred. The 2019 up trend is broken. But like $WLSH, $SPX remains above its 200MA.

Lose that and $SPX has a lot of space to the downside to explore the larger megaphone structure.

And don’t forget the wedge break comes in context of lower highs in $XVG, the value line geometric index:

This index has been calling BS on new highs all year and has been a great signal to support selling new highs.

Indeed, step back a bit in time and its significance becomes even more pronounced:

Both $XVG and $SPX have broken their 2009 up trend and while $SPX went on to make marginal new highs twice since the 2018 fall highs $XVG did not and has now fallen below the 2015 highs.

Why? Because aside from tech still holding onto some gains the larger market is rotten underneath, a performance chart to the January 2018 highs makes this very clear:

So while $SPX, $WLSH, and $NDX currently remain above their 200MAs many other index charts are complete horror shows.

The broader $NYSE is below its 200MA:

Its back to November 2017 levels and is sitting at key support. It may be setting up for a rally soon, either from here or from further new lows yet to come, but be careful what you wish for. A sizable bounce would conspicuously look like the building of larger right shoulder for a head and shoulders pattern. December lows here we come again? Too early to tell, but the potential is in the chart.

Also at key support here. Break that and unleash hell. Its underlying volatility pattern has broken out. Key time for small caps, but note small caps are also below their 200MA.

Also below the 200MA, fell out of its channel and looks to have a larger topping pattern in play. Perhaps the trend line will offer support on further weakness, but this is one ugly chart.

Speaking of ugly: The banking sector. Yields are pounding them and they just broke major support:

Now get a reversal in yields and banks can rally again, but like the ones above it’s not a happy chart.

So if people keep saying what a great bull market this is and how we are only a few percentage points off the highs show them these charts. Because the truth shall set them free.

And truth says, at this moment, many of these important index charts, while up on the year (if you bought the bottom with no prior positions) are not performing well at all. Since the January 2018 highs cost are down and many sizably so:

Doesn’t mean we can’t rally. We’re currently getting some sizable short term oversold readings given this week’s drubbing. But let me tell you: These are not happy charts. They all have big time technical problems with sizable resistance ahead on any rallies.

Indeed none of the larger potential bearish structures have been invalidated which leaves a lot of room for downside risk still to evolve.

In the past year and a half there has been one consistent thread in markets: New highs have beens old every single time. None have sustained. New highs have come on ever weakening participation and negative divergences.

Now this can change of course, but as of now it hasn’t, hence all of these charts remain on the must watch list for everyone. In my humble opinion of course ;-).