The amount of Fed Not QE outstanding has reached a new record of $548 billion as of February 20. That number will continue to increase as the Fed continues buying Treasuries outright, regardless of the fact that the TOMO (Temporary Open Market Operations) Repo component is shrinking. Follow the money. Find the profits!Liquidity is money.…

END_OF_DOCUMENT_TOKEN_TO_BE_REPLACED

Stock Market Trading Setup for Friday, February 14, 2020 Hourly ES S&P 500 Futures Chart Setups don’t get much more ambiguous, and fraught with 2 way potential, than this. OK, it’s more upside than downside potential today. An upside breakout through 3390 would target 3415. Follow the money. Find the profits!Liquidity is money. Regardless of…

END_OF_DOCUMENT_TOKEN_TO_BE_REPLACED

Stock Market Trading Setup for Thursday February 13, 2020 I have been beset with brainfarts lately. Must be old age settin in. Bad enough when you let em loose in the sofa cushions, but in headlines on your own website? Ohgawd, how embarrassing! Follow the money. Find the profits!Liquidity is money. Regardless of where in…

END_OF_DOCUMENT_TOKEN_TO_BE_REPLACED

The Great White shark is closing its jaws. Bears have been eaten and digested already. Now it’s the bulls’ turn. Follow the money. Find the profits!Liquidity is money. Regardless of where in the world that money originates, eventually it flows to and through Wall Street. So if you want to know the direction of the…

END_OF_DOCUMENT_TOKEN_TO_BE_REPLACED

Kah PLOWY! That’s what they used to say in the funnies when I was a kid. Many of you reading this have no clue what the funnies were. But that’s ok! Because the charts know all and tell all, just like my old Ouija board. Or was that my Magic 8 Ball? Follow the money.…

END_OF_DOCUMENT_TOKEN_TO_BE_REPLACED

This morning’s hourly chart of the ES futures looks a lot like yesterday’s. But boy is this thing pregnant. The question is, with what? Follow the money. Find the profits!Liquidity is money. Regardless of where in the world that money originates, eventually it flows to and through Wall Street. So if you want to know…

END_OF_DOCUMENT_TOKEN_TO_BE_REPLACED

As evidence continues to emerge that US labor markets are gradually healing and wage growth is starting to stabilize (see story), market participants as beginning to consider the possibility that inflation in the US has stabilized, albeit at low levels (see post). Other signals seem to pint in the same direction.

Outside of China-driven raw materials weakness, commodity prices are off the lows and rising, though remain at depressed levels relative to the past five years.

Americans are starting to pay attention to rising prices, particularly as some of the more visible commodities such as coffee or gasoline become more expensive.

This sentiment is reflected in the rising Google search frequency for the word “inflation” and will likely show up in the surveys such the UMichigan inflation expectations over the next few months.

The markets are starting to take notice. The latest TIPS auction showed a sudden increase in investor demand.

Bloomberg: – The U.S. sale of $18 billion in five-year Treasury Inflation Protected Securities drew the strongest demand ever from a class of investors that includes foreign central banks.

Indirect bidders bought 58.4 percent of the securities at the TIPS sale. That compared with an average of 42.3 percent at the past 10 auctions. The bid-to-cover ratio, which gauges demand by comparing the amount bid with the amount offered, was 2.7, matching the highest level since December 2012. The notes sold at a yield of negative 0.213 percent, below the negative 0.162 percent average forecast of five of the Fed’s 22 primary dealers in a Bloomberg News poll.

“The stats were off the charts,” said Stanley Sun, a New York-based strategist at Nomura Holdings Inc., a primary dealer, said in a telephone interview.

The five-year breakeven rate (a rough measure of implied inflation expectations) jumped as a result.

Clearly we’ve had these “false starts” in the past, just to end up staring in the face of disinflationary pressures. But this time conditions seem to be in place for a sustainable stabilization in the rate of inflation.

END_OF_DOCUMENT_TOKEN_TO_BE_REPLACED

Some analysts are beginning to suggest that inflation in the Unites States may have bottomed. As discussed earlier this years (see post), US inflation indicators were pointing to the lowest rate since 2009. Are the global disinflationary pressures going to push the rate of price increases in the US to new lows or have we hit the bottom?

First of all, what is the market telling us? Market expectations of future inflation remain subdued, with the so-called breakeven (implied from TIPS) rates still near the 3-year low. 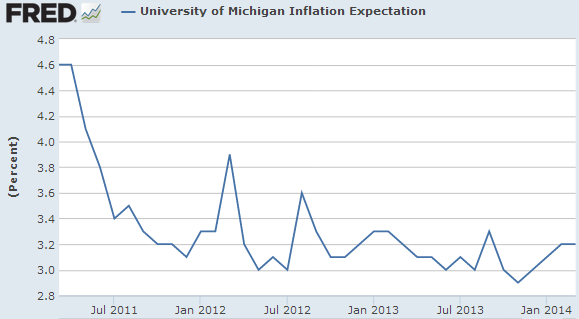 With expectations at the lows, why are some analysts calling the bottom on inflation in the US? Here are a few reasons:

1. Looks like producer prices are showing signs of life, as the latest PPI figure came in above expectations.

The index has recently been changed to include a larger swath of the economy and it was those newer components which showed increases.

GS: – Headline producer prices rose 0.5% in March (vs. consensus +0.1%), while core prices rose 0.6% (vs. consensus +0.2%). The largest contributor to the unexpectedly large gain was trade margins—an implicit profit measure—which rose 1.4%. Within this category, there were large gains in flooring (+8.1%), chemicals (+4.7%), cleaning supplies (+4.0%), and apparel (+3.3%). The stronger March figures in this category followed a 1.0% decline in February, which pulled the core PPI down to -0.2%. The PPI for finished goods ex-food and energy—the “old” core PPI—rose a more typical 0.1%, consistent with subdued pipeline inflation.

Nevertheless this increase got some people thinking.

2. Today’s CPI increase was also firmer than expected (see story), a great deal of which was due to rising costs of shelter and food (not great for the US consumer).

3. In spite of the weakness in some commodity prices driven by China’s slowdown (see post), commodity indices are generally off the lows.

In particular, the energy sector has come to life recently, with both gasoline and natural gas prices on the rise.

4. Some senior Fed officials are beginning to talk about inflation bottoming out (could of course be wishful thinking).

James Bullard: – “One thing you can say is that while inflation has drifted down … it kind of bottomed out in the past nine months, and I think it’s poised to go higher, back towards our target”

Given the data thus far, it’s difficult to make a reasonable projection at this point. With low inflation priced in however, any turnaround will take the markets by surprise.

END_OF_DOCUMENT_TOKEN_TO_BE_REPLACED

Here’s a story about a bank that failed, got rescued, was resuscitated, and made its private equity investors more than 100% on their money, all the while costing the FDIC around $5.9 billion.

END_OF_DOCUMENT_TOKEN_TO_BE_REPLACED

For the first time the ECB has admitted that disinflationary pressures present a problem for the central bank. Draghi is blaming the downward pressures on prices in the Eurozone on the unusually strong euro.WSJ: – “The strengthening of the effective eu…

END_OF_DOCUMENT_TOKEN_TO_BE_REPLACED

It may be something symbolic such as a small rate cut or possibly a more substantial move such as a new LTRO program (discussed here), but the European Central Bank will be forced to loosen monetary policy in the near future.  Here are the reasons…

END_OF_DOCUMENT_TOKEN_TO_BE_REPLACED

Economic indicators continue to point the Fed staying the course with the policy of “small taper” (see post) – a gradual reduction in securities purchases. Behind all the noisy economic data over the past month, one key measure is telling the central b…

END_OF_DOCUMENT_TOKEN_TO_BE_REPLACED

The Euro area inflation indicators are pushing into dangerous territory. The core CPI measure in particular is trending sharply lower. The ECB has so far been taking a “wait and see” attitude, though some on the Governing Council are apparently getting concerned.

END_OF_DOCUMENT_TOKEN_TO_BE_REPLACED

Inflation measures provide key data points for the Fed in deciding on the timing and the magnitude of taper. Last week’s PPI and today’s CPI numbers continue to show a fairly benign inflation environment.Source: EconodayHowever CPI and similar measures…

END_OF_DOCUMENT_TOKEN_TO_BE_REPLACED

Weak inflation readings in the US continue provide the Fed with the rationale to maintain securities purchases in what amounts to a “QE trap”. With the PCE inflation measure once again below one percent, the FOMC doves fear that “taper” could bring about deflationary pressures. The risk of course is that inflation measures remain benign and what was meant to be a short-term policy measure extends beyond anyone’s expectations. 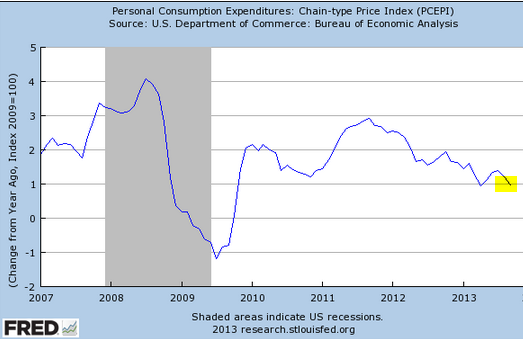 Scotiabank: – The Fed’s preferred measure of inflation — the price deflator for total personal consumer expenditures — came in at +0.9% y/y in September. We feel that markets are underestimating the importance of this observation to the Fed. That is tied with April for the softest inflation reading since October 2009 when the US economy was just beginning to emerge from recession.

The forward looking inflation measure derived from TIPS yield (breakeven), has now also turned lower after what looked like a recent upward movement. 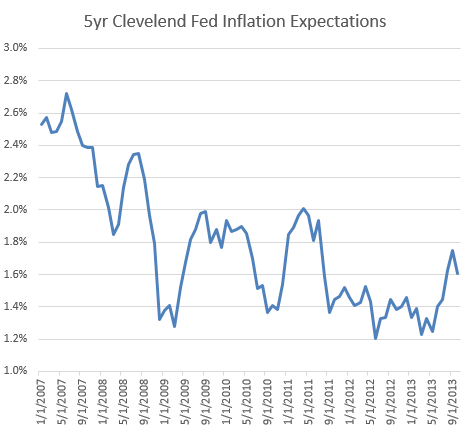 Similarly, we’ve seen a slump in commodity prices (see discussion), which is another signal of weak inflation readings.

With inflation measures remaining this low, many argue (see story) that there is no rush to begin exiting the current monetary policy. The fact that the US monetary base is now 4.5 times greater than it was 5 years ago and capital markets are now fully addicted to ongoing stimulus does not seem add any urgency for these economists. The longer this goes on, the more difficult will be the exit, making it harder for the Fed to pull the trigger. Welcome to the QE trap. 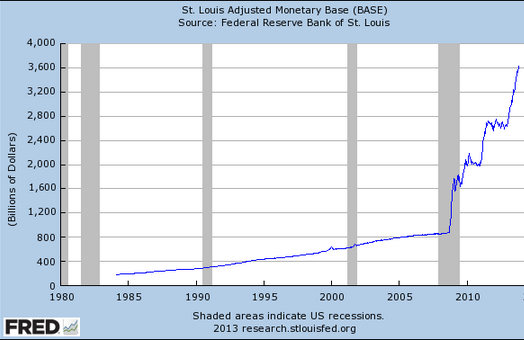