END_OF_DOCUMENT_TOKEN_TO_BE_REPLACED

Home prices in the UK continue to rise to new highs, exceeding the pre-recession peak. The price increases started in London and have now spread nationally. Many families are quickly being priced out of the housing market. Some are calling it a bubble.
The Guardian: – UK house prices continued to accelerate in February, rising by 1.9% during the month and pushing the annual rate of inflation to more than 9%, according to the latest data from the Office for National Statistics.

Commentators warned of a “superbubble” and said the market was “out of control” as the official figures reported year-on-year prices rises of 17.7% in London and said first-time buyers had experienced double-digit price growth.Just to put this in perspective, US home prices are now roughly at the levels they were a decade ago. UK home prices have risen over 40% over the same period. 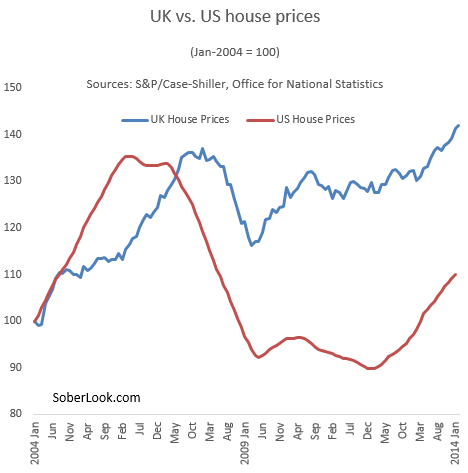 Many are blaming the Bank of England’s so-called FLS (the Funding for Lending Scheme – see overview) for flooding the market with cheap mortgages. Indeed the program has resulted in lower bank financing costs and lower mortgage rates.

But is all this cheap credit creating a speculative housing bubble in the UK or is there another factor at play? If you speak with British realtors, they tend to have one major complaint in common. The UK is facing a housing shortage as the post-recession home construction activity remains subdued.

Homes are being built at about half the rate needed to meet the pace of British households creation. But that is also partially the case in the US – so why such a divergence in house price trajectories between the two nations? The answer, according to Goldman, is that unlike the US and some other nations that went on a building spree during the bubble years, the UK was facing a housing shortage even before the financial crisis. The UK housing “bust” happened without the “boom”.

But with housing prices rising faster than wages, doesn’t it mean that this rally should be ending soon? Not necessarily. The acute housing shortage has put a similar upward pressure on rents as well, limiting housing options.

And while fewer people can purchase a home after the recession, those who can end up paying materially less on their mortgage than they would be paying in rent (thanks to FLS). They are jumping into the housing market and driving up prices.

Of course if the Bank of England pulls the plug on FLS, home price increases are likely to slow. The housing shortage however will still remain, resulting in higher demand for rentals. Whether paying more for a home purchase or paying a higher rent, one thing is clear: UK residents will be paying increasingly more for shelter in the years to come.

END_OF_DOCUMENT_TOKEN_TO_BE_REPLACED

While the US housing market remains relatively robust, it is likely to face a couple of headwinds going forward. One is the lower affordability index, which is declining due to higher prices and higher mortgage rates (see discussion). On a year-over-ye…

END_OF_DOCUMENT_TOKEN_TO_BE_REPLACED

One factor that may continue to provide tailwinds to US housing recovery is the rental market. Rents are rising faster than inflation, widening the spread between housing costs and wages. 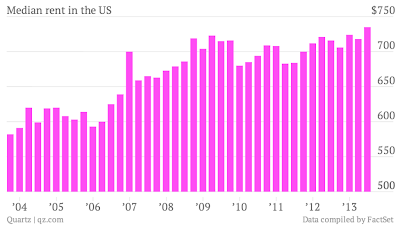 Bloomberg: – For households with children, rising housing costs, elevated unemployment and stagnant earnings are increasingly placing rent beyond reach. The housing slump made matters worse as former homeowners turned into renters, increasing competition for available apartments.
…
Nationally, the average hourly wage among renters is $14.32 this year compared with the $18.79 needed to afford an apartment at a fair-market rent, as defined by the U.S. Department of Housing and Urban Development, without spending more than 30 percent of income on housing, a National Low Income Housing Coalition report found in March. The $4.47 gap this year is wider than the $4.10 differential in 2012.
…
Median household income has fallen every year for the past five after adjusting for inflation, with Americans earning no more than they did in 1996, according to data from the Census Bureau. The share of people making less than $15,000 climbed to 13 percent of the population in 2012, from 10.9 percent in 2000, and the share making less than $35,000 expanded to 35.4 percent from 31.4 percent.

According to the Fed, the ratio of rental obligations to disposable income is now at post-recession high. Growing rental costs are driven by declining vacancies and lower housing inventory in the US. Of course the recent rise in interest rates has not helped matters either. Higher rates raise the break-even rent level for landlords who finance their properties.

While this development is encouraging some renters to plunge into homeownership, giving a boost to home prices, it is also displacing low income families. This trend is quite troubling.

Bloomberg: – The number of children without a home increased by an estimated 2 percent, according to NAEH, a Washington-based non-profit focused on policy and research on the needs of homeless people.
…
The share of Americans experiencing “deep poverty,” living at less than 50 percent of the $23,492 poverty line for a family of four, climbed to 6.6 percent in 2012 from 4.5 percent in 2000, based on Census Bureau data released last month.

That may increase the pipeline of Americans heading toward homelessness. There was a 9.4 percent increase in the number of poor people “doubled up,” or living with friends or family due to economic need, between 2010 and 2011, based on the NAEH 2013 report. Crowley said 2011 is the latest year for which usable data on doubling up is available.

END_OF_DOCUMENT_TOKEN_TO_BE_REPLACED

Economists and the markets have been cheering the jump in housing prices and improving construction statistics. But for many Americans rising demand and higher house prices bring more bad news. Based on the latest data (report below) from the Joint Center for Housing Studies, Harvard University (JCHS), here are some sad facts about the housing situation in the US.

1. The number of homes for sale is still near record lows. That is driving up costs and quickly pricing many households out of the market. 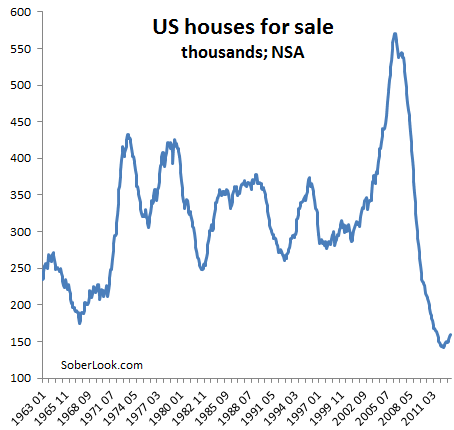 2. The US actually has a large number of vacant homes that are not making it into the market. Vacant homes are often in areas with few job opportunities, making it impossible to renovate, sell, or rent.  Many are in places like Detroit and simply will never be sold.

3. We are seeing the confluence of tight housing conditions and weak household incomes. As JCHS points out “most types of households have seen their real incomes decline over the past decade”. This is particularly true for growing households.

4. As a result, “the total number of households paying more than half their incomes for housing soared by 6.7 million from 2001 to 2011, a jump of 49 percent”. Note that this is a problem for both homeowners and renters.

5. Housing shortages (discussed here) and rapid renter household growth are driving up rents. At the same time, millions of federal rental subsidies for low income renters are set to expire in the next decade.

6. On top of all this is the fact that households are now forming at a rate of about a million per year. The market is demanding a million new residential units each year. Unless construction can keep up and prices decline or incomes rise (neither seems likely right now), this trend will drive up the number of households with “housing cost burdens” (already over 40 million – #4 above) – for both homeowners and renters. 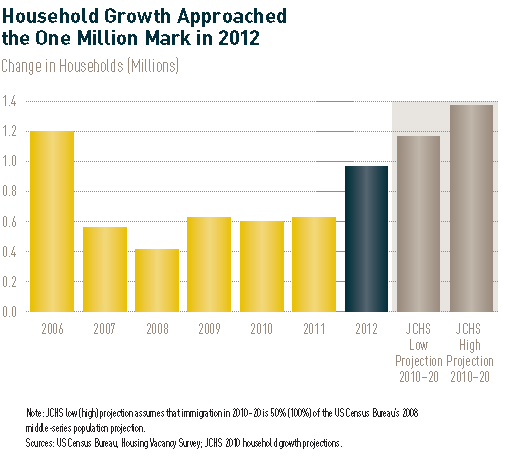 END_OF_DOCUMENT_TOKEN_TO_BE_REPLACED

In another sign the housing recovery is genuine, home prices soared the most in more than seven years in April in 20 U.S. cities.

END_OF_DOCUMENT_TOKEN_TO_BE_REPLACED

Homes available for sale as well as the housing supplies measured in months are now at pre-recession levels, while household formation continues to recover (see post). This development was predicted by William Wheaton back in 2009. Source: JPMorganF…

END_OF_DOCUMENT_TOKEN_TO_BE_REPLACED

As we finally begin to see improvements in the US housing market (see discussion), it is important to note that we still have roughly 9 million mortgages that are “underwater” (the mortgage balance is higher than the value of the home). That’…

END_OF_DOCUMENT_TOKEN_TO_BE_REPLACED

Back in April, we discussed a very simple US housing market index developed by Goldman. The index basically looks at the percentage of US zipcodes that have experienced housing price appreciation (see discussion). Here is an update. Currently roughly 5…

END_OF_DOCUMENT_TOKEN_TO_BE_REPLACED

As mortgage rates in the US hit new lows, the US consumer should benefit. The question is how much difference does the mortgage rate make in improving economic growth. We should see the impact on the economy from two sources: higher home sales due…

END_OF_DOCUMENT_TOKEN_TO_BE_REPLACED

By BINYAMIN APPELBAUM Follow the money. Find the profits!Liquidity is money. Regardless of where in the world that money originates, eventually it flows to and through Wall Street. So if you want to know the direction of the next big moves in stocks and bonds, just follow the money. Lee Adler’s Liquidity Trader tracks and…