It’s looking more like zero growth in total sales for 2014.

Gauging the trajectory of the US housing market – Sober Look

One set of economic data that shocked some economists last week was the existing home sales report. In spite of sharply higher mortgage rates, sales rose in August.

NYTimes: – Sales of existing houses climbed 1.7 percent in August to a six-and-a-half-year high, and factories grew busier in the mid-Atlantic region this month, providing signs that rising borrowing costs are weighing only modestly on the economy.

The National Association of Realtors said on Thursday that existing houses were selling at an annual rate of 5.48 million units, the highest level since early 2007, when a housing bubble was deflating and the economy was sliding toward its deepest recession in decades.

The report surprised analysts who had expected higher interest rates would lead to a decline in resales. Mortgage rates have risen more than a percentage point since the Federal Reserve’s chairman, Ben S. Bernanke, hinted in May that the central bank could begin reducing its economic stimulus soon. On Wednesday, however, the Fed said it would maintain its $85 billion monthly purchases of Treasury and mortgage-backed securities.

One could argue that home-buyers are ignoring higher rates, but that doesn’t seem likely. Is this spike driven by capitulating buyers who had been waiting on the sidelines for mortgage rates to drop? That strategy had certainly worked in the past and buyers are realizing that this time it’s different.

One reason to think that the jump in existing home sales is transient is the decline we’ve seen in new home sales – which most are attributing to higher rates. The divergence shown below is unlikely to be sustainable. 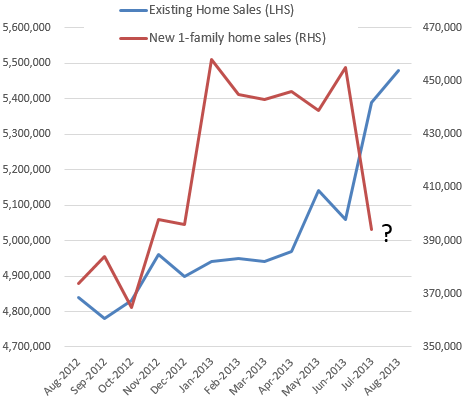 The August number for new home sales (to be released this Wednesday, 10AM ET) will be critical to gauge the trajectory of the US housing market. On Thursday we will also be getting the pending home sales index that should provide a glimpse into sales going forward.

Today’s news of a sharp decline in new home sales has left many economists scratching their heads, trying to understand the trajectory of the US housing market. And here is what they are struggling with:With the homebuilder survey showing tremendous op…

One major survey in the US that is showing some promising signs is the National Association of Home Builders Market Index. Here is the definition: Derived from a monthly survey that NAHB has been conducting for more than 20 years, the NAHB/Wells Farg…

Make No Mistake, Housing Is In An Uptrend

Builders are only adding about 450,000 single family units per year. Total starts including multifamily over the past 12 months were 653,000. Meanwhile, the US…

Sales of previously occupied homes up in April – USA TODAY

If You Buy a House, We’ll Throw In a Free Car!

RICHMOND, Ill. — In this distant Chicago suburb, a builder has finally found a way to persuade people to buy a new house: he throws in a car.

Kim Meier’s spring promotion, which includes a $17,000 credit at a nearby General Motors dealer,…

The percentage decline was the largest since July.