Refreshing was the questioning of Federal Reserve Chairman Ben S. Bernanke by Congressman Scott Garrett from New Jersey in “Shooting Stars.” We can hope his influence may spread.

It seems that aside from halting the yuan appreciation (see discussion) Beijing has decided to use fiscal rather than monetary tools to stimulate the economy.

Bloomberg: – Chinese Premier Li Keqiang said the nation will speed railway construction, especially in central and western regions, adding support for an economy that’s set to expand at the slowest pace in 23 years.

The State Council also yesterday approved tax breaks for small companies and reduced fees for exporters as it pledged to keep the yuan’s exchange rate “basically stable at a reasonable and balanced level,” according to a statement after a meeting led by Li. China plans a railway development fund, the government said.

Once again, the rationale to maintain a relatively tight monetary stance is to make sure that the shadow high yield deposit business and property speculation doesn’t grow out of control (see post). Applying the brakes too suddenly however is quite dangerous, particularly for a nation that in recent years has become addicted to credit. The broad measure of credit (sometimes called “social financing”) is now nearly double the GDP.

Tight and uncertain monetary policy could have a severe adverse effect on China’s weakened economy by forcing an uncontrolled unwind of credit. And PBoC’s policy remains both tight and uncertain. The overnight interbank (SHIBOR) rate has risen by 35bp in the past week. Most central banks would spend months fretting over such an adjustment. Other short-term rates have risen even more. 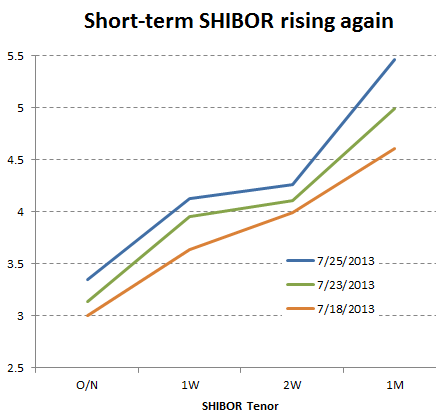 PBoC’s attempt to force an abrupt end to credit addiction could easily offset any economic benefits of speed railway construction or tax breaks. Bursting such a massive credit bubble is a delicate process, which China’s central bank is not executing in a controlled manner.

The last time we discussed the Credit Suisse Global Risk Appetite Index, it was headed for “euphoria” (see this post from May 21). Around May 22 something changed, and it was all downhill from there.

In recent decades financial bubbles have been plentiful. From the US housing to the global uranium markets, bubbles seem to be simply inevitable (and generally can not be prevented by regulation or other government interference). In fact bubbles occur …

The Next "Lehman Moment" Is Coming Fast

It seems that my latest edition of Insights & Indictments was warmly received by the bullish crowd, many of whom reached out to me to thank me for my optimism.
I’m sorry to burst your bubbles, but I am not a ragi…

It seems that my Thursday edition of Wall Street Insights & Indictments was warmly received by the bullish crowd, many of whom reached out to me to thank…

Want to Put Iran Out of Business? Here’s How

If you want bloodless regime change in Iran, then do one thing: drop the price of oil to $25/barrel. Yes, it’s entirely possible.

Those attempting to pressure Iran by increasing “tensions” and thus the price of oil have it precisely backwards.&nbs…

The euro system was doomed from inception for fundamental reasons; trying to conjure up “something for nothing” solutions will fail catastrophically, and soon.

As Europe flails helplessly in the waves of insolvency, its leadership has tossed it a life…

Student loans will keep a lid on how high housing prices will recover once the economy does settle down.

It is amazing to think that currently $1 trillion in student loans still need to be paid and the amount of student debt is only growing. Th…

The Next Financial Crisis Will Be Even Worse

The last financial crisis isn’t over, but we might as well start get…

Prices Show Us Not to Argue with Mother Market

Technical Trader subscribers click here to download the complete report. All swing cycles are back in gear but only one of them has a projection.…

I could just repost the same thing every time I update this report. The Fed continues to rig the stock market, and that rigging continues…

Gold has been rangebound and mining stocks have looked terrible. Both are entering periods of elevated risk. Subscribers, click here to download the report. Try…

We’ve been following the story of the US Treasury paying down outstanding T-bills since late February. $680 billion of paydowns led to a big turnaround…

Chart Picks – This Market is Hamburger