The amount of Fed Not QE outstanding has reached a new record of $548 billion as of February 20. That number will continue to increase as the Fed continues buying Treasuries outright, regardless of the fact that the TOMO (Temporary Open Market Operations) Repo component is shrinking. Follow the money. Find the profits!Liquidity is money.…

END_OF_DOCUMENT_TOKEN_TO_BE_REPLACED

Stock Market Trading Setup for Friday, February 14, 2020 Hourly ES S&P 500 Futures Chart Setups don’t get much more ambiguous, and fraught with 2 way potential, than this. OK, it’s more upside than downside potential today. An upside breakout through 3390 would target 3415. Follow the money. Find the profits!Liquidity is money. Regardless of…

END_OF_DOCUMENT_TOKEN_TO_BE_REPLACED

Stock Market Trading Setup for Thursday February 13, 2020 I have been beset with brainfarts lately. Must be old age settin in. Bad enough when you let em loose in the sofa cushions, but in headlines on your own website? Ohgawd, how embarrassing! Follow the money. Find the profits!Liquidity is money. Regardless of where in…

END_OF_DOCUMENT_TOKEN_TO_BE_REPLACED

The Great White shark is closing its jaws. Bears have been eaten and digested already. Now it’s the bulls’ turn. Follow the money. Find the profits!Liquidity is money. Regardless of where in the world that money originates, eventually it flows to and through Wall Street. So if you want to know the direction of the…

END_OF_DOCUMENT_TOKEN_TO_BE_REPLACED

Kah PLOWY! That’s what they used to say in the funnies when I was a kid. Many of you reading this have no clue what the funnies were. But that’s ok! Because the charts know all and tell all, just like my old Ouija board. Or was that my Magic 8 Ball? Follow the money.…

END_OF_DOCUMENT_TOKEN_TO_BE_REPLACED

This morning’s hourly chart of the ES futures looks a lot like yesterday’s. But boy is this thing pregnant. The question is, with what? Follow the money. Find the profits!Liquidity is money. Regardless of where in the world that money originates, eventually it flows to and through Wall Street. So if you want to know…

END_OF_DOCUMENT_TOKEN_TO_BE_REPLACED

What is wrong with the international banking system? In order to maintain sustainable global economic growth, the banking system needs to be functional and profitable.

END_OF_DOCUMENT_TOKEN_TO_BE_REPLACED

Here’s something you probably don’t know, and it will really tick you off.

END_OF_DOCUMENT_TOKEN_TO_BE_REPLACED

Credit underwriters pride themselves in their ability to cut lending when they sense that economic fundamentals have changed for the worse. For example one often hears bankers talking about passing on deals in 2007 because of “not liking the fundamenta…

END_OF_DOCUMENT_TOKEN_TO_BE_REPLACED

The US banking sector continues to outperform the broader market. Furthermore, for the first time this year, regional bank shares are outperforming the overall bank index, which is driven primarily by the largest banks.

The key reason for the strong performance among US banks remains the steepening treasury curve. Banks pay next to nothing on deposits while charging a rate that is often linked to treasuries on the loans they make. The steeper the curve, the wider the “margin”. And given the leverage inherent in the banking system, even a small margin increase materially improves the return on equity.

The treasury curve has been steepening sharply in recent weeks – as seen from the spread between the 10y and the 2y yields (as well as 30y and 2y). 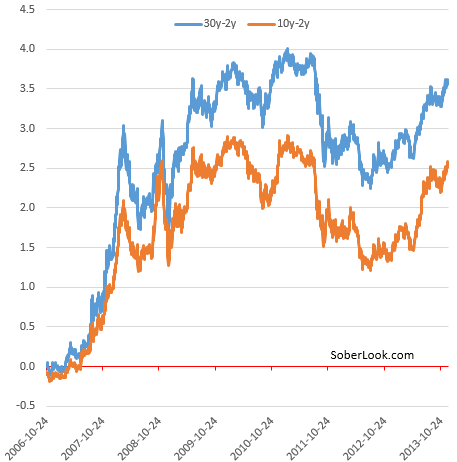 The rise in yields is instead mostly driven by higher expectations of earlier and faster reductions in securities purchases by the Fed. In particular, some at the Fed have been happy to see a bit of stabilization in monthly payrolls growth (at around 200K). 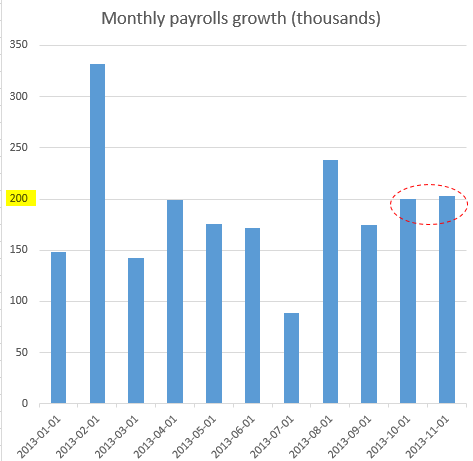 The sustainability of this trend is yet to be proven, but combined with better GDP figures (see chart) and improved new home sales (see chart), these data may be sufficient to push even this dovish FOMC into launching its exit sooner than expected. The fact that corporate spreads are at the levels not seen since 2007 (see post) doesn’t help the case for maintaining the current pace of QE either.

At the same time, Bernanke was quite clear that it will be some time before the Fed will begin pushing up short-term rates – even after QE ends. We therefore have the short-term rates (and therefore bank deposit rates) remaining near zero, while longer term rates rising due to expectations of taper. This is resulting in significant curve steepening, a great environment for banks.

The next question is why all of a sudden we are seeing regional banks outperforming the overall banking sector. The answer has to do with the changing regulatory landscape, as the Volcker Rule is about to go into effect.

WSJ: – Barring a last-minute surprise, the votes will result in tighter restrictions on certain trading activities that go beyond what regulators had agreed to just a few weeks ago, according to people familiar with the matter. Since then, regulators have been locked in tense negotiations that threatened to upend the provision.

Under the final rule, regulators are expected to closely track trading activities with an eye on whether certain trades known as hedges are designed to post a profit rather than offset risks that accompany trading with clients. The finished version of the Volcker rule is likely to require that hedges be designed to reduce specific risks, according to a portion of the proposed rule reviewed by The Wall Street Journal.

Hedging activity should shrink or alleviate “one or more specific, identifiable risks” such as market risk, currency or foreign-exchange risk, and interest-rate risk, the language says.

“This is the new era of Big Brother banking,” said Michael Mayo, an analyst with CLSA Americas. “Now banks’ fortunes are more closely tied to the government.”

This “Big Brother banking” will have a far greater effect on the largest financial institutions than on the regional or smaller banks. The inability to trade in “prop” accounts is already resulting in reduced liquidity and weaker market making capability among the larger banks. As a result, in the US bond markets for example, banks often do little more than act as “introduction brokers” for a quarter-point spread. In some instances this is far cry from the high volume market-making activities banks used to be involved in. All this is resulting in declining “sales & trading” revenue for the largest banks.

Bloomberg: – The $44 billion at stake represents principal trading revenue at the five largest Wall Street firms in the 12 months ended Sept. 30, led by New York-based JPMorgan, the biggest U.S. lender, with $11.4 billion. An additional $14 billion of the banks’ investment revenue could be reduced by the rule’s limits on stakes in hedge funds and private-equity deals. Collectively, the sum represents 18 percent of the companies’ revenue.

Not facing these same headwinds, regional banks are now outperforming.

END_OF_DOCUMENT_TOKEN_TO_BE_REPLACED

The fact that this week’s $13 billion JPMorgan settlement was a record between a U.S. company and the government is not the most notable part of this deal…

What’s more shocking about this record-high settlement is that more than half of it could be tax-deductible.

END_OF_DOCUMENT_TOKEN_TO_BE_REPLACED

Two of the largest U.S. financial institutions kicked off third-quarter results for big bank earnings today, giving us a peek at how they fared amid tough times for both firms.

Wells Fargo & Co (NYSE: WFC) is in the midst of slashing headcount in its mortgage unit by some 1,800, and JPMorgan Chase & Co (NYSE: JPM) is tangled up in settlement talks with the U.S. Justice Department.

END_OF_DOCUMENT_TOKEN_TO_BE_REPLACED

Yesterday she launched a wire-guided Scud missile at the too-big-to-fail banks.

END_OF_DOCUMENT_TOKEN_TO_BE_REPLACED

US equity markets are continuing to price in higher premiums for bank shares relative to the overall market. The increased steepness of the yield curve will mean higher net interest income, as banks borrow at historically low rates from depositors and …