I present this chart without comment for our goldbug friends. And another one for good measure. Gold Could Get Out of Its Own Way This Week LEE ADLER 3 – GOLD TRADER APRIL 13, 2021

END_OF_DOCUMENT_TOKEN_TO_BE_REPLACED

Originally posted at Capitalstool.  Bulls won today’s Screen Game by a raw score of 49 to 22. That’s swing trade buy signals vs. sell signals from yesterday’s action. Two of the sell signals were inverse ETFs, so we can add those to  the buy side for an adjusted score of 51 to 20. Buy signals are…

END_OF_DOCUMENT_TOKEN_TO_BE_REPLACED

I just want to give Liquidity Trader Money Trends subscribers a quick heads up. We always expect extra liquidity around the middle of the month, and we look for rallies at this time because of it. But we just got a little more juice from Doctor Yellen.

END_OF_DOCUMENT_TOKEN_TO_BE_REPLACED

Climb every rally, stream every ford, find a better Tesla, till you kill all the shorts.

END_OF_DOCUMENT_TOKEN_TO_BE_REPLACED

Bulls eked out a win today’s Screen Game by a score of 38 to 30. That’s swing trade buy signals vs. sell signals from yesterday’s action.

The bulls have been controlling the ball, despite losing a few of these scrimmages lately.

END_OF_DOCUMENT_TOKEN_TO_BE_REPLACED

And the Gangsta Bankas cook the books.

END_OF_DOCUMENT_TOKEN_TO_BE_REPLACED

As promised in the previous post on Ireland, here is an interesting e-mail from a reader discussing some of the facts around the Irish banking system bailout – particularly as it relates to Anglo Irish Bank:

END_OF_DOCUMENT_TOKEN_TO_BE_REPLACED

Ireland was the one country in the Eurozone “periphery” that seemed to be bucking the trend (see post). Many had hoped that the nation will be able to withstand the Eurozone recession due to its strong trade balance. Exports were really humming until g…

END_OF_DOCUMENT_TOKEN_TO_BE_REPLACED

The debate around “too big to fail” of the US banking system is often infused with political rhetoric and media hype. Let’s go through some Q&A on the subject and discuss the facts.

Q: Did large banks take disproportionate amounts of real-estate related risk vs. smaller banks prior to the crisis?
A: No. That’s a myth. Smaller banks were much more exposed to real estate (see discussion).

Q: Which “too big to fail” banks were directly bailed out by the US federal authorities during the 2008 crisis?
A: While hundreds of banks were forced to take TARP funds, only Citigroup (among US banks) received an explicit bailout to keep it afloat. Note that Bear Stearns (and Lehman), AIG, GM/GMAC, Chrysler, Fannie and Freddie were not banks. Neither was GE Capital and other corporations who relied on commercial paper funding and needed the Fed’s help to keep them afloat. Wachovia may have become the second such large bank if it wasn’t purchased by Wells.

Q: Why did Citi fail in 2008?
A: Citi ran into trouble because of a massive off-balance-sheet portfolio the firm funded with commercial paper. In late 2007, when the commercial paper market dried up, Citi was forced to take these assets onto its balance sheet. The bank was not sufficiently capitalized to absorb the losses resulting from these assets being written down.

Q: What were the assets Citi was “warehousing” off-balance-sheet?
A: A great deal of that portfolio was the “AAA” and other senior tranches of CDOs that Citi often helped originate (including mortgage related assets). Rating agencies were instrumental in helping banks like Citi structure these assets and keep them off balance sheet in CP conduits.

Q: Why did Citi (as well as many other banks) hold so much off-balance sheet?
A: Because they received a significantly more favorable capital treatment by doing so (the so-called “regulatory capital arbitrage” – see discussion from 2009).

Q: Did Citi break any state or federal laws by doing what it did?
A: No. All of this was perfectly legal and federal authorities were aware of these structures.

Q: What has been done since 2008 to make sure the Citi situation doesn’t happen again?
A:

Q: What is the downside of breaking up banks like JPMorgan?
A: Large US corporations need large banks to provide credit and capital markets access/services (Boeing is not going to use Queens County Savings Bank). Without large US banks, US companies will turn to foreign banks and will be at the mercy of those institutions’ capital availability and regulatory frameworks. Foreign banks will also begin dominating US capital markets primary activities (bond issuance, IPOs, debt syndications, etc.) And in an event of a credit crisis foreign banks (who are to some extent controlled by foreign governments) will give priority to their domestic corporations, putting US firms at risk.

Q: How large are US largest banks relative to the US total economic output? How does it compare to other countries?
A: See chart below: 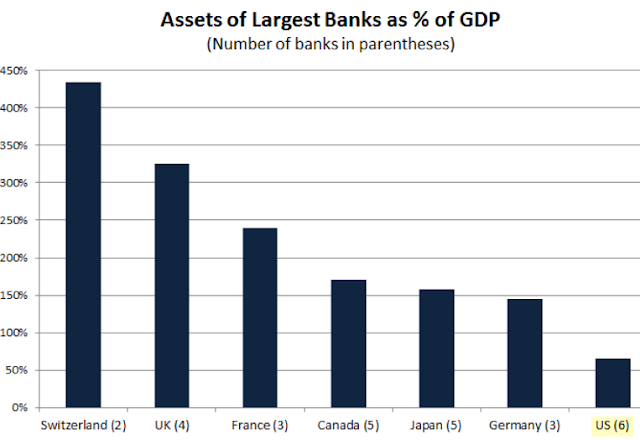 So before jumping on the “too big to fail” bandwagon, get the facts.

Meeting of the Federal Advisory Council

END_OF_DOCUMENT_TOKEN_TO_BE_REPLACED

This is a syndicated repost courtesy of Sober Look. To view original, click here. Reposted with permission. Kostas Kalevras had another good post on the latest data release from the Bank of Spain (here). The good news is that Spanish banks’ borrowings from the ECB fell in September, following the ECB’s commitment to do “whatever…

END_OF_DOCUMENT_TOKEN_TO_BE_REPLACED

The Spanish bank bailout process still lacks sufficient detail – after months since the announcement (see discussion). Here is the latest: 1. The so-called “Bad Bank” will use 10% equity injection and 90% guaranteed by the Spanish governm…

END_OF_DOCUMENT_TOKEN_TO_BE_REPLACED

Extended excerpt from the Executive Summary. The Treasury had a very light calendar and easy skating last week, but the calendar will be heavier in the week ahead, with notes and bonds being offered in addition to the regular weekly bill auctions. The notes and bonds will settle on Friday. It’s unusual for them to…

END_OF_DOCUMENT_TOKEN_TO_BE_REPLACED

(via AFP) Spanish Prime Minister Mariano Rajoy has admitted the state is struggling to borrow, as its risk premium hit a euro-era record and fears spread over the country’s stricken banks. Rajoy sought Monday to calm investors after the distressed lender Bankia pleaded for the biggest state rescue in Spanish…

END_OF_DOCUMENT_TOKEN_TO_BE_REPLACED

(via AFP) The new president of Spain’s fourth-biggest bank, Bankia, said Saturday he was confident of receiving from the government 19 billion euros ($24 billion) in the largest bank bailout in the country’s history. Jose Ignacio Goirigolzarri voiced his optimism that the struggling bank, which holds some 10…