Last update highlighted NYA, and noted that the pattern suggested at least a near-term pause/decline was forthcoming after the next bounce, and that call turned out well.  Below is the updated chart:As noted previously, SPX’s recent rally bears so…

Two words keep coming to mind as I study the charts right now: “inconclusive noise.”  I think it’s vitally important as a trader (and probably as a person, too) to “know when you don’t know.”  The near-term possibilities having suddenly spiraled into infinity, so it’s going to be difficult to project the market’s next move until it gives us a bit more info.  If you’re a new trader (or a new reader), please don’t be discouraged by this; the market alternates between moments of clarity and moments of ambiguity, and it will clarify again soon enough.

I studied a number of markets yesterday, and while I’m not going to publish charts on every one of them, there are lots of conflicting signals out there.  Some updates leave me feeling that I put in a whole lot of work for a very limited reward (for readers), and this is one of those.  I’m inclined to give the bears a near-term edge, but my confidence is low at the moment.

I’m going to start off with the Dow Jones Industrials (INDU), since the rectangle pattern here has some fairly clear implications using classic technical analysis. 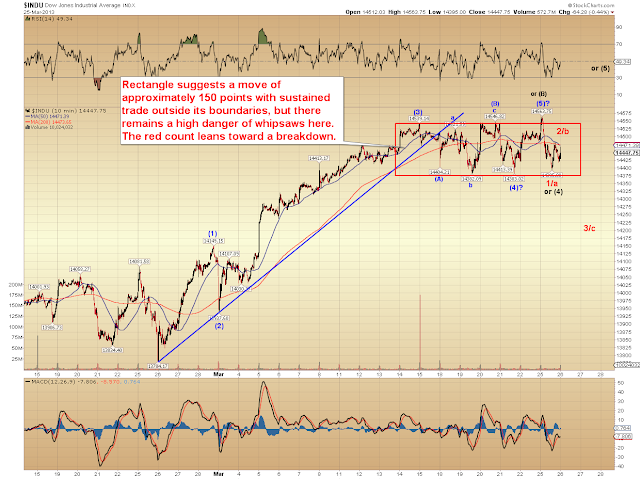 On the SPX 10-minute chart, I’ve outlined the two near-term bull and bear potentials which presently appear most reasonable, but I have not shown the most bullish of the near-term potentials.  I’ll outline that potential briefly here in the body of the article (and on the Russell 2000 chart in a moment):  It is possible that the rally from 1538 to 1561 is wave i of 5, and the entire move since is a corrective second wave.  That count suggests a target in the 1580-1600 zone and becomes an option above 1565, while it would be invalidated below 1538.  The annotations explain the details of the other two counts. 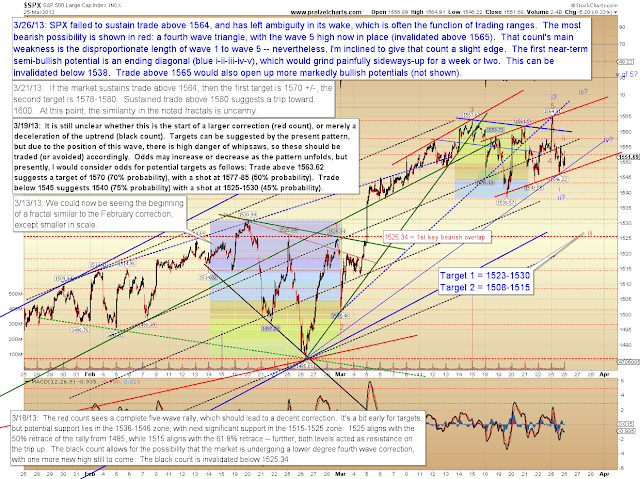 On the hourly chart, I’ve moved a couple labels, but the conundrum remains the same as it’s been.  I continue to believe that wave 5 has either completed or will complete with one final leg, at which point we should see a larger turn. 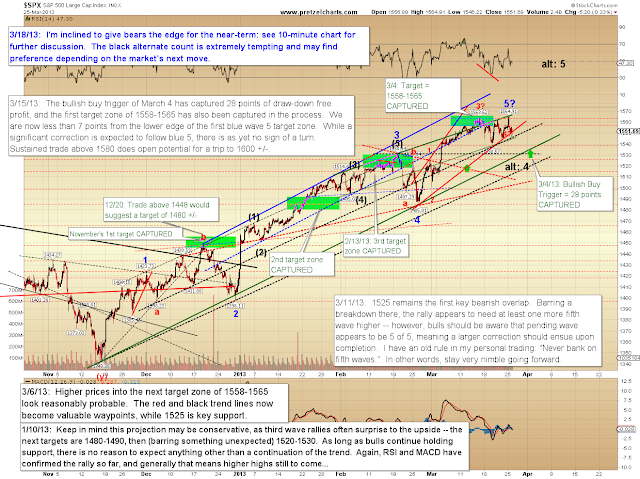 I’d like to share one last chart which is presently throwing the near-term bear count into disarray — and it’s one of the reasons I’m not ready to declare a high level of confidence yet.  The count shown here is fairly bullish for the near-term, and I have listed the key levels.  Sustained trade above 954 would suggest a target of 965. 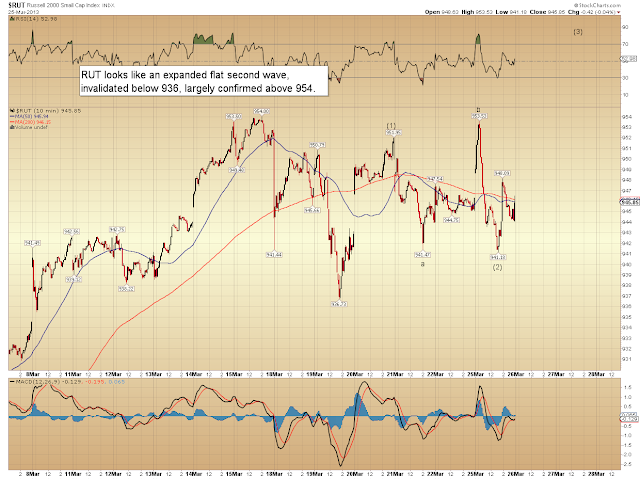 In conclusion, yesterday’s market has left the wave counts inconclusive at multiple degrees.  This is often the function of trading ranges.  The market regularly alternates between moments of clarity and moments of noise — right now we’re still in the “noise zone,” and we’re simply going to have to be content to watch and wait for the time being.  Trade safe.

The original article, and many more, can be found at http://www.PretzelCharts.com

The market has remained within the trading range since last Thursday’s update.  There was one new development since then, and that’s the fact that on Friday, the decline overlapped itself in a fashion which indicates…

Well, the FOMC meeting yesterday turned out to be a complete dud.  In keeping with the spirit of the recent St. Patrick’s Day holiday, Bernanke simply reaffirmed…

An Alternate Bearish Potential for the Intermediate Term – Pretzel Logic

I’m going to keep the body of this article a bit brief and let the charts do most of the talking.  Let’s start off with…

Bears Want to Know: Are We There Yet? – Pretzel Logic

Yesterday saw a solid gap down after the weekend Cyprus news, but buyers appeared immediately, and the market rallied strongly into the afternoon, before running into some selling again into the close.  The…

Will the Fed Kick-off an Equities Correction Next Week? Pretzel Logic

While it seems like this rally leg will never end, it is, of course, guaranteed that it will end at some point.  I have an interesting…

“We cannot put off living until we are ready. The most salient characteristic of life is its coerciveness: it is always urgent, ‘here and now,’…

On Tuesday, the Dow Jones Industrial Average (INDU) managed its eighth consecutive advancing session (though just barely), which is a fairly rare event.  In fact, since 2000, there…

Composite Liquidity Should Be Bearish, Here’s Why It’s Not Right Now

Composite liquidity is flat and will remain so until the Fed restarts QE. That should be bearish, but it’s not right now. There are a couple of reasons for that. And they are reasons to hold off from looking to get short right now. But are they reason enough to go long? Here’s the answer.

The small list for last week started with two closeouts on Monday and one hold, resulting in an average net gain of 1.6% on an…

The market’s little pullback last week didn’t break anything. The short term trend is in apparent consolidation while the intermediate term still looks to be…