Yesterday (Monday), Money Morning Chief Investment Strategist Keith Fitz-Gerald appeared on FOX Business’ “Varney & Co.”to make projections about what a stalemate on the debt ceiling will do to the market.

Market distortions in the short end of the curve – Sober Look

In recent years the 1-month treasury bill has been quite sensitive to policy risks. While in the past the bill mostly responded to changes in the Fed’s overnight target rate, in the current zero rate environment other events cause bill pricing to fluct…

It took a while for the public to begin to care about the debt ceiling fiasco, but the realization is sinking in that it’s not just “fun and games”.  Google search frequency for the term “government default” has moved way past the spike in 2011 to hit a new record.

Equity investors have pinned their hopes on a potential breakthrough in negotiations, as Paul Ryan suddenly stepped into a leadership role (see post). VIX dropped some 24% (relative move) in a couple of days in response and indices rose sharply. 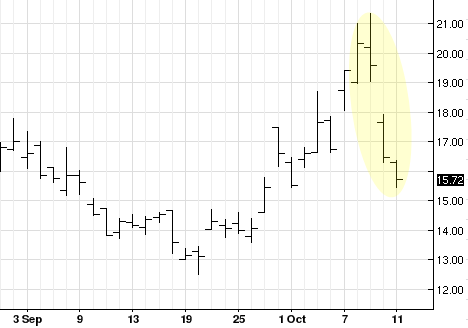 Expectations have risen that the Republican leadership will attempt to find a face saving solution that will reduce the ongoing bleeding of popular support for the GOP. The party is in trouble and is facing potential loss of seats in the House. What’s even more concerning for some is the prospect of a Democrat in the White House for another 8 years. If anything, this should be enough of an impetus to find a speedy resolution.

Bond investors however are not taking any chances. The yield curve inversion has now moved beyond 1-month bills, with maturities out to three months feeling the impact. Rumors persist that institutions are continuing to move out of treasury money market accounts in fear of having their funds frozen.

Today much of the action has moved to the Senate, with hopes that something positive could happen this weekend. The news so far is not encouraging.

After Senate Democratic leaders rejected a proposal Saturday by Sen. Susan Collins (R-Maine) to end the budget impasse, the burden to find a solution now falls squarely on Majority Leader Harry Reid and Minority Leader Mitch McConnell — two shrewd tacticians who have a long, complicated and contentious personal and political history with each other.

Republican senators, eager for a way out of a shutdown fight that has roiled their party’s brand, reacted to the leadership discussions positively, believing that the two crafty dealmakers could concoct a proposal to reopen the government and avert the nation’s first-ever default as soon as next week.

Reid, however, was notably more dour.

When asked if he is confident he could reach a deal with McConnell, Reid told POLITICO: “No.”

With Congress moving like molasses and time running out, more and more Americans are wondering what happens when we hit the debt ceiling.
Title: debt ceiling hell – Description: C:UsersdzeilerDesktopdebt ceiling faqHieronymus_Bosch,_Hell_(Garden_of_Earthly_Delights_tryptich,_right_panel)_-_detail_1_(devil).JPG
The short answer is that it would be bad – as in catastrophically, you’ve-never-seen-anything-like-this-in-your-life bad.

The Republican party has a problem. The government shutdown seems to be helping the president in the polls.Simultaneously Republicans’ image is getting hammered, as an increasingly growing proportion of US voters blame them for the shutdown.Associated …

The media and politicians in both parties are still largely echoing the Administration’s framing of the fiscal situation and absolving the President of his share of the blame for the debt limit crisis. They’re reinforcing his message They’re also preparing the way for a compromise, that will, almost certainly, result in hurtful cuts to Government spending including renewed consideration of “the Great Betrayal,” also known as “the Grand Bargain,” including passage of the chained CPI cuts to Social Security over the objections of a large majority of the American people.

Yields on treasury bills with near-term maturities have spiked to multi-year highs as the debt ceiling deadline approaches. While market participants are generally expecting to see a resolution (albeit a temporary one), some are not taking any chances.

USA Today (AP): — Fidelity Investments, the nation’s largest money market mutual fund manager, has sold all of its short-term U.S. government debt — the latest sign that investors are increasingly nervous about the possibility of a government default.

Institutional investors have rolled a chunk of their holdings into cash during September but in the last week or so started pulling out of government money market funds – moving funds into bank deposits instead.

Investors fear that their accounts will be frozen, as money fund managers who don’t receive timely payments on bills are unable to meet redemptions. Many money market funds also use repo (collateralized loans) with treasuries or agency MBS as collateral. These short-term loans usually yield slightly more than treasury bills, giving money markets a few extra basis points. But with bills under pressure and investors getting out, repo rates have suddenly risen as well.

Bloomberg: – “We’ve seen some rise in repo rates in sympathy with the broad move higher in money-market yields, most dramatically in the near-term Treasury bills, given concerns over the debt-ceiling,” said Andrew Hollenhorst, fixed-income strategist at Citigroup Inc. in New York. “October futures contracts have had a sharp yield rise, signaling expectations for significant moves higher ahead, consistent with the sharp spike we saw in 2011 before the August debt-limit deadline.”

Some continue to believe that a technical default by the US government would impact treasury securities only. But as we see from the repo example, that assumption is quite naive. An adjustment to bill rates is already rippling through a number of other money market instruments. If we don’t have a resolution on the debt ceiling soon, the shock will ripple across broader markets as well.

How long will it take for the US Treasury to run out of funds if the October 17th deadline comes and goes without an increase in the debt ceiling? The answer is – less than a couple of weeks.Source: Barclays ResearchFitch Ratings: – A formal review of …

It now looks like the big media and leaders in both parties are no longer focusing on the Government Shutdown crisis, but are now moving on to the notion that the shutdown is melding with the upcoming probable breaching of the debt limit to create a combined mother of all fiscal crises.

This is a syndicated repost published with the permission of Money Morning. To view original, click here. Opinions herein are not those of the Wall Street…

Major Inflection Point Here to Determine Whether Bull or Bear

4000 is not only a nice round number, but it coincides with technical levels and indications that will tell us in the next few days…

The pullback over the past week looks like a healthy correction in a 9-12 month cycle up phase.  I added two more picks to our…

Stock Market Is Grinding Through Resistance

The question is whether resistance or upside momentum will win. The answer will come this week. Here are the directional signals. Technical Trader subscribers click…