END_OF_DOCUMENT_TOKEN_TO_BE_REPLACED

Friday’s US jobs report combined with the September FOMC decision has significantly altered market expectations for the timing of the first hike by the Federal Reserve. The Fed Funds futures implied probability of a 2015 liftoff has dropped below 30%.S…

END_OF_DOCUMENT_TOKEN_TO_BE_REPLACED

The majority of economists still expect the Federal Reserve to begin the long-awaited liftoff next month.However is this dovish FOMC truly prepared to “pull the trigger” this time? Here are some reasons the central bank is likely to delay the first hik…

END_OF_DOCUMENT_TOKEN_TO_BE_REPLACED

With the so-called “currency wars” escalating after Beijing’s recent devaluation and China’s growth stalling, investors have suddenly become quite jittery. We are now seeing significant signs of stress in US equity markets.The S&P500 index fin…

END_OF_DOCUMENT_TOKEN_TO_BE_REPLACED

Euorzone leadership remains uneasy with the third bailout of Greece.

END_OF_DOCUMENT_TOKEN_TO_BE_REPLACED

Back in February (see post) numerous equity investors refused to believe that a crude oil recovery is likely to be unsustainable. Many viewed this as a buying opportunity – just as they did in 2011 when such “bottom fishing” strategy worked. …

END_OF_DOCUMENT_TOKEN_TO_BE_REPLACED

In 2014 the Saudis could no longer accept the loss of crude oil market share as the North American production levels shot up sharply over a three-year period. Source: Yardeni ResearchThe Saudi response was quite rational. Rather than cutting production…

END_OF_DOCUMENT_TOKEN_TO_BE_REPLACED

Let’s be clear: if Greece were to exit the currency union, the Bank of Greece and its assets would be immediately expropriated by the Greek government (making them part of the “new” Bank of Greece). Many in Europe are pointing out how such action would be illegal. There nothing “legal” about Grexit to begin with – the system was designed to have laws for “marriage” but no laws for “divorce”. And with the Bank of Greece exiting so would go the collateral. To assume that the Bank of Greece is a permanent fixture of the Eurosystem is not prudent credit risk management. Therefore the Eurosystem’s exposure to Greece should be added to the €323bn of other debt.

Having said that, Target2 debt owed by the Bank of Greece to the Eurosystem has no maturity and requires no immeduate payments. Therefore a standalone Bank of Greece may choose to keep the liability outstanding in order to get access to the euro payment system. The Eurozone’s political leadership may however demand a timely repayment of these balances, given the size of the exposure.

This central-bank-to-central-bank exposure is now rising rapidly as the ECB approves a new limit increase for emergency funding (ELA) on a daily basis. This is what a run on the Greek banking system looks like.

While some accounts are moving abroad and into other assets (including European bonds held in foreign accounts and even into bitcoin), much of the withdrawal activity is simply converting deposits into banknotes. Anecdotal evidence suggests that many in Greece are leaving a minimal amount at the bank to keep the account open and the rest is in cash stored under the kitchen tiles, etc. Greece is quickly becoming a cash economy. Capital controls could be the next logical move by the Greek government and the population and businesses are simply protecting themselves.

Here is an example:

Bloomberg: – Dorothea Lambros stood outside an HSBC branch in central Athens on Friday afternoon, an envelope stuffed with cash in one hand and a 38,000 euro cashier’s check in the other.

She was a few minutes too late to make her deposit at the London-based bank. She was too scared to take her life-savings back to her Greek bank. She worried it wouldn’t survive the weekend.

“I don’t know what happens on Monday,” said Lambros, a 58-year-old government employee.

There is hope however for a less-than a disastrous outcome. These near-panic conditions could be sufficient to bring the nation’s leftist government back to the negotiating table this weekend. However, time is fast running out as €1.6bn is due to the IMF in less than 10 days.

Moreover, there is a good possibility that Greece could default without leaving the currency union. With a strong support for the euro, Greeks could push for a referendum to form a more centrist government that would re-engage the creditor institutions. Here is a summary from Barclays Research:

END_OF_DOCUMENT_TOKEN_TO_BE_REPLACED

The latest report from Job Openings and Labor Turnover Survey (JOLTS) shows that job openings in the United States are at a 15-year high.

END_OF_DOCUMENT_TOKEN_TO_BE_REPLACED

Coal prices in the US are collapsing. The September Appalachian coal futures contract gave up over 2% on Friday as the industry faces unprecedented challenges.

One can see the decline in the industry’s activity levels by tracking rail shipments of coal. Railcar loadings are now at the lowest level in decades.

The industry’s woes have been caused by a “perfect storm” of events that wrecked havoc on US coal producers. Here are some of the recent developments:

1. US natural gas production has been on the rise for the last decade, continuing through today in spite of the ongoing reductions in rig count. Prices have declined recently as inventory levels returned to normal after the draw-down during the winter of 2013-14. As a result, power producers are increasingly shifting to natural gas. Here is a recent note from the US Energy Information Administration:

PLATTS: – Appalachian Power said this week the cost to upgrade coal-fired units at four power plants in Virginia and West Virginia that were retired in May would have been so high it did not even compile cost estimates for the work.

In a report filed earlier this week with the West Virginia Public Service Commission further explaining why the Clinch River and Glen Lyn power plants in Virginia and the Kanawha River and Philip Sporn power plants in West Virginia were retired, APCo said it “has not performed any detailed cost estimates because the order of magnitude of the costs was so tremendous.”

3. Global coal demand has fallen off sharply, driven largely (but not entirely) by China.

The Sydney Morning  Herald: China’s coal imports slumped 41 per cent in May from a year earlier to 14.25 million tonnes and were down sharply on April despite industry expectations of a pick-up in seasonal demand, data showed on Monday.

Total imports in the first five months of the year reached 83.26 million tonnes, down 38.2 per cent compared with the previous year, according to preliminary data from China’s General Administration of Customs.

Imports normally improve over the northern summer, but analysts said any upturn would be limited despite relatively low inventory levels at thermal power plants, with hydropower likely to meet a large share of the increase in power demand.

“Imports are constantly decreasing compared to last year due to new policies, and the use of new (renewable) energy,” said Zheng Nan, an analyst with China’s Shenyin Wanguo Securities. 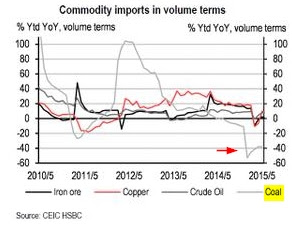 4. To make matters worse for the industry, the state of Wyoming is reviewing the balance sheets of some major coal producers. The law requires coal firms to carry insurance that would provide environmental cleanup resources should the firms fail. But with the latest price pressures, some firms may not qualify for such programs and would be forced to maintain collateral. In the current environment these firms may not have the resources for these new requirements.

Bloomberg: – The Wyoming Department of Environmental Quality’s Land Quality Division is reviewing 2014 financial data from Peabody and Arch to see if they still qualify for a “self-bonding” program that allows coal producers to cheaply insure their clean-up costs in case of bankruptcy, Kimber Wichmann, an economist at the department, said in a phone interview.

“Investors don’t know how to handicap this self-bonding issue,” Ted O’Brien, chief executive officer of Doyle Trading Consultants LLC, said in a phone interview. “Until the companies come out and give Wall Street certainty that they know how to deal with it, I think we’re going to be stuck in this vortex.”

Shares of some large coal producers are hitting record lows. 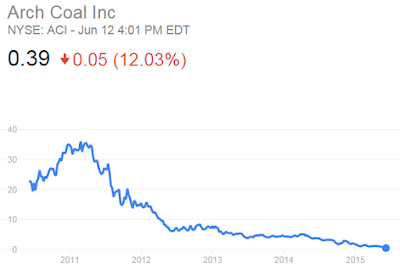 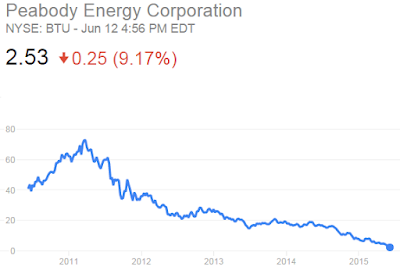 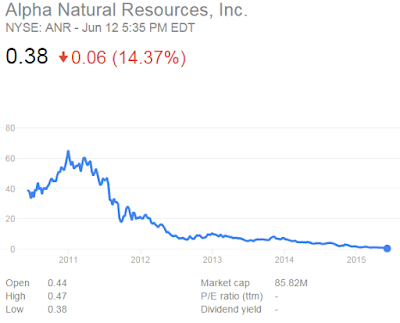 To be sure, coal will remain a major source of electricity production in the United States. Even if the EIA projection (chart below) is too optimistic on the future of coal usage, the survivors of the “coal crunch” stand to profit handsomely. Moreover, some diversified energy firms are still making money on coal even at these prices. Nevertheless, the industry is undergoing a historic shakeup, which a number of industry participants (particularly those who are highly leveraged) may not survive.