END_OF_DOCUMENT_TOKEN_TO_BE_REPLACED

This is a syndicated repost courtesy of Confounded Interest . To view original, click here. Reposted with permission.

(Bloomberg) — The Federal Reserve took action to calm money markets on Tuesday, injecting billions in cash to quell a surge in short-term rates that was pushing up its policy benchmark rate and threatening to drive up borrowing costs for companies and consumers.

While the spike wasn’t evidence of any sort of imminent financial crisis, it highlighted how the Fed was losing control over short-term lending, one of its key tools for implementing monetary policy. It also indicated Wall Street is struggling to absorb record sales of Treasury debt to fund a swelling U.S. budget deficit. What’s more, many dealers have curtailed trading because of safeguards implemented after the 2008 crisis, making these markets more prone to volatility.

Money markets saw funding shortages Monday and Tuesday, driving the rate on one-day loans backed by Treasury bonds — known as repurchase agreements, or repos — as high as 10%, about four times greater than last week’s levels, according to ICAP data.

More importantly, the turmoil in the repo market caused a key benchmark for policy makers — known as the effective fed funds rate — to jump to 2.25%, an increase that, if left unchecked, could have started impacting broader borrowing costs in the economy. Because that’s at the top of the range where Fed officials want the rate to be, they are likely to make yet another tweak to a key part of their policy tool set to try to get things back on track when they meet Wednesday to set benchmark rates.

But the central bank didn’t wait until then to do something, resorting to a money-market operation it hasn’t deployed in a decade. The New York Fed bought $53.2 billion of securities on Tuesday, hoping to quell the liquidity squeeze. It appeared to help. For instance, the cost to borrow dollars for one week while lending euros retreated after almost doubling Monday.

For repo traders, hedge funds and others that rely on that market for financing, this intervention came none too soon.

A bit of an overshoot?

And something that went unnoticed by many …

The New York Fed bought $3.001b of T-bills in the secondary market Tuesday as part of its planned reinvestment purchases.

Yes, it is The Big Squeeze (not to confused with The Big Short). 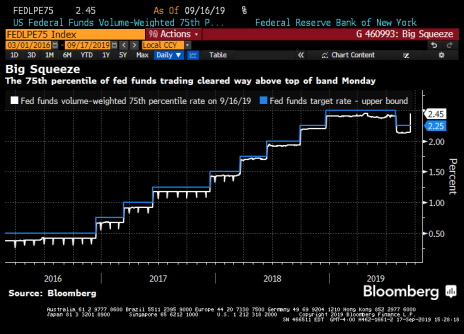