The market kept accelerating out of trend channels yesterday. That’s crash behavior. In this case, a crash-up.

END_OF_DOCUMENT_TOKEN_TO_BE_REPLACED

At least that’s the 5 day cycle projection. For the big picture, see

END_OF_DOCUMENT_TOKEN_TO_BE_REPLACED

According to quantum mechanics, a flushed turd can appear in two places simultaneously, based on the position of the observer. But the quantum philosopher asks, if there is no observer, does the turd exist? In the stock market, there are many observers…

END_OF_DOCUMENT_TOKEN_TO_BE_REPLACED

Buy it? Or sell the rip?

END_OF_DOCUMENT_TOKEN_TO_BE_REPLACED

The market appears to be early in a 5 day cycle up phase that began yesterday afternoon. So far, it is weak but it is working on breaking out of a downtrend channel, as of 4:30 AM New Yak time.

END_OF_DOCUMENT_TOKEN_TO_BE_REPLACED

Bulls are walking a tight rope here. There are smoldering fires burning everywhere. Almost too many to list, all of which have the potential to unleash a major forest fire. Europe data is getting more lousy by the minute, as is Asia’s. European bank levels are freaking everyone out, and we look one bank shoe drop away from a major support break. Last week it was the UK that announced a negative quarterly GDP print, today it was Singapore that showed dismal figures and dropped GDP growth projections to zero. Yield curves keep inverting and yields keep dropping like flies all around the stench of a global economy struggling. Argentina’s sudden blow-up yesterday adds to global contagion stress and unrest in Hong Kong is rightfully adding to angst in that region. Add plummeting German ZEW data:

..and the global bear case is getting ever more obvious and perhaps this should worry bears the most in this environment, as any of these things can also be sources of futures relief rallies if things calm down a bit.

After all, in this climate, all it would take is for President Trump to tweet “tariffs delayed” and you have a rip your face off relief rally.

But that all being said concerns are widening.

The 10 year 3 month curve keeps in inverting to a troubling zone:

The macro wheels are turning big time and it’s coming at a critical point of market valuations versus GDP, a point I’ve been beating the drum on in recent days to raise awareness as I haven’t seen it discussed anywhere.

I made the point yesterday on CNBC:

And also on CNN:

“The biggest bubbles in most of our lifetimes were the 2000 tech bubble, the 2007 real estate bubble and the monstrosity we are witnessing now: the cheap money bubble,” writes Sven Henrich https://cnn.it/2yT5hBk

Last month US markets once again hit a little-known but highly relevant ceiling which has spelled market trouble numerous times in the recent past, most famously during the major market bubble bursts…

114 people are talking about this

The cheap money bubble, the low interest bubble, the one that makes record expansion in debt possible and sustainable in the here and now. But none of that changes the valuation reality and it’s a critical point hence my effort to raise awareness.

From my perch the only way the Fed can avoid a recession is to blow an even bigger valuation bubble versus the size of the underlying economy, a larger one than what we saw during the tech bubble or the housing bubble.

US stocks have held relatively well in so far. We’re currently in the middle of another smaller correction greatly aided by buybacks and consumer confidence still high. High confidence equals spending. And look, in the world of passive investing and still high market prices and 50 year lows in unemployment consumer confidence can remain high until 2 things happen: Stocks drop hard and/or unemployment turns which it invariable will do at some point. In December retail sales stunk up the joint as stocks tanked. Confidence is a prickly thing and can change quickly. See a major market drop again and confidence will wane quickly.

Now fund managers are sensing recession risk is on the increase on a level similar to 2011 and in 2008. In 2011 the Fed responded by announcing operation Twist & ultimately with QE3. In 2008 they dropped rates by over 300bp in just that year for an ultimate total off over 500bps. So far we only have a 25bp rate cut with with only 200bp to work with before hitting zero again.

But forget yields and yield curve inversions for a moment. There’s another subtle signal floating about: Transports:

Correlation may not imply causation, but, fwiw, when $TRAN makes new all time highs and prints a negative divergence on these new highs a recession has unfolded thereafter. 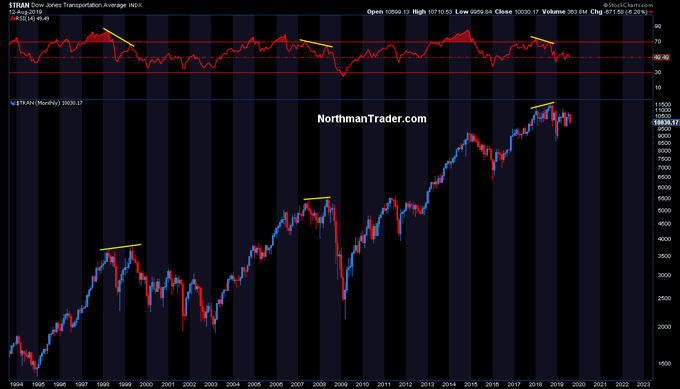 24 people are talking about this

Transport have been the canary in the coal mine for a while as you can see if you expand the tweet ahead above.

Just because there’s recession denial doesn’t mean a recession isn’t coming. The only question remains the when and were. With all the global uncertainty it’s hard to imagine companies committing to large scale hiring programs, but so far jobs are hanging in there and that’s a piece of comfort for bulls.

But be sure they’re walking a tight rope and are one larger sell-off away from facing a different reality, a reality that has already been unfolding in the value line geometric index that keeps printing lower highs and lower highs:

And now $SPX is overtly at risk of breaking its 2019 trend. Last week’s save has been sold this week so far.

And for banks this support line is critical to maintain:

A break below and things could get ugly fast. The same message sent by transports as they sport a potential topping pattern that could target the December lows:

Nothing’s confirmed broken yet and markets are becoming oversold. But bulls are walking a tight rope here and sure could use a magic tweet or headline to avert a breakdown.

But will a headline or tweet rally be enough to change the larger picture? Depends on what it is I suppose. At this point sentiment is so bad President Trump could probably inspire a global rally by simply folding on his trade war, declare victory and end it. No trade deal required. Word is he’s now on his own and is ignoring his advisers.

As of now there’s no apparent end in sight to the trade war or stress in currency and bond markets nor the slowdown in growth while US stock markets remain historically highly elevated versus underlying GDP while earnings estimates are dropping hard:

Bottomline: Both bulls and bears are on notice all the time in this headline driven market, but bulls have a lot to lose if they lose balance.