END_OF_DOCUMENT_TOKEN_TO_BE_REPLACED

Excess liquidity kills volatility and causes bids to rise relentlessly. But when you zoom in to hourly or shorter, it’s whippy.  Whipsaws and false breakouts galore. They’re brutalizing day traders.

END_OF_DOCUMENT_TOKEN_TO_BE_REPLACED

Just before 8 AM in New York, pullback to bottom of hourly trend channel. 2 of 3 indicators on the sell side and the other is close.  2-3 day cycle projection still 3359.

END_OF_DOCUMENT_TOKEN_TO_BE_REPLACED

Jobs Friday. Tax data said for July said yooge upside surprise. The as/of date is July 12. Meanwhile- This is a 45 minute bar chart. At 3:30 AM it’s saying we’re either at the bottom of this pullback, or half way down.  3335 is key hourly resistance trend.

END_OF_DOCUMENT_TOKEN_TO_BE_REPLACED

This is ridiculous. Absurd even.

END_OF_DOCUMENT_TOKEN_TO_BE_REPLACED

This chart says the price of gold will double in 4 months. Is now a good time to get aboard?

END_OF_DOCUMENT_TOKEN_TO_BE_REPLACED

Are markets engaged in a major topping process? Last week I’ve raised the question of potential topping patterns being in the process of being formed if $SPX can’t recapture 2900 and move on to make new highs (Sins of the Past).

Let’s dig into this question a bit more deeply. Let me be the first to tell you to evaluate what I’m about to show you with caution and a healthy dose of skepticism, but in context of record debt levels, record BBB and junk debt levels, trapped central bankers, slowing growth and an escalating trade war between the 2 largest economies on the planet with asset prices artificially inflated by record buybacks and political jawboning we’re staring at least at a similar backdrop as we did in 2007/2008, except now debt is even higher. 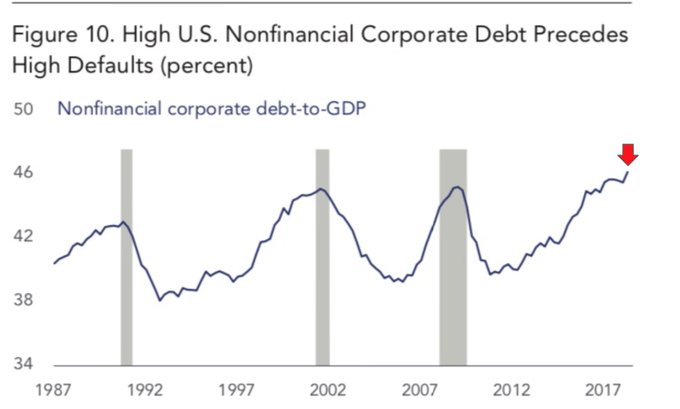 We are here.
Grey areas = recessions

Oh, and credit card interest rates are at all time highs.

But don’t worry says Jay Powell, engaged in the required game of projecting confidence like his predecessors:

Federal Reserve Chairman Ben Bernanke said that he didn’t believe the growing number of mortgage defaults would seriously harm the economy, and also noted that banks  share significant risks when…

18 people are talking about this

‘We got this’ appears to be the message. After all Bullard and Evans are already talking QE and/or rate cuts/zero rates. It’s all theoretical of course. Wink wink.

Come on. We’re at the end of a bloated debt cycle propagated by easy money and it’s simply not producing growth anymore. Trade wars, blade wars, whatever, fact is growth peaked last year and it was all artificial because of the also artificial tax cuts.

And the bond market has been screaming warnings since last year when it tagged its multi-year trend line. Long time readers are familiar with this macro chart:

You can either believe unemployment remains at 50 year lows or you may not. 99.99% of history shows it won’t stay there.

Fact is often times the 10 year peaks before unemployment hits a cycle low. That’s what we saw in the last 2 cycles. And we just saw it again. And yes, they’ve done a good job ramping these markets back up following the December lows. But new highs are always a dangerous thing if they come on weakening participation. As I said last week: All things being equal 2019 stinks.

Given the broader backdrop it may be worthwhile to look at the bigger chart picture again to see if there is evidence that markets may be engaged in a major topping process. It’s always easy to get lost in the day to day noise and it’s always useful to go back and check for clues.

Look at that chop and these constant rallies even after the peak in March 2000. If you were in the thick of that action you had no inkling this was going to come:

But each vertical rally would’ve likely shaken everybody trying to short out or gotten people bullish again. Buy the dip dies hard. Yet selling these rallies would’ve been exactly the right thing to do.

And now we are here:

Massive moves up and down and up. Currently right below the January 2018 highs, after just a 5% correction. If this all seems familiar it should. Indeed the ghosts of the past may come back to haunt these markets in a big way, because this is a structure we’ve witnessed before.

Comparing the current structure of $SPX to the time period of 2006/2007 I present to you the ultimate ghost chart:

Oh I know, we’ve all seen analogs before on twitter that never meant anything, 1987, 1929, and even previous 2007/2008 analogs, but frankly I’ve never see one aligning in structure as close as this one.

Now if this structure is on the money we are here:

How will we know when this analog becomes invalid?

Simply put, new highs. Then the analog may be dust and off the table. Get a China deal and we may make new highs in an instant. Given how sour sentiment is at the moment in regards to a deal it would likely spark a major relief rally.

But without a China deal it’s hard to see new highs with a protracted trade war putting the already fragile business cycle at further risk.

How will we know if this analog continues to apply? If we start dropping soon and proceed to drop below 2800 on $SPX. If the script follows we should see then another rally that then fails and ultimately proceeds take out the lows of December.

Seems unfathomable at this point, but then nobody, except the big short guys, was expecting a massive bear market coming at the “we are here” moment in 2007.

Yet currently Wall Street is predicting solid higher prices for the rest of the year.

To which I say – never forget:

I’m just saying: Neither the Fed or Wall Street will tell you to sell. Ever.

It bears repeating:
No central banker will ever give a heads-up about a coming downturn or crisis.
Their job, above all, is to maintain confidence no matter what.
Bernanke 2007: Subprime contained
Powell 2019: Leveraged lending no threat

178 people are talking about this

We are on our own.

As I said at the outset of this post: View analogs with a healthy dose of caution. Analogs work until they don’t, but there’s little denying that the principle structure we’re seeing in markets, coupled with the economic macro backdrop of slowing growth, extreme debt levels and a Fed in risk denial mode are putting us at structural/technical risk of a major topping process. And, without new highs, the ghost chart may come to haunt us all.