END_OF_DOCUMENT_TOKEN_TO_BE_REPLACED

$SPX keeps lingering near all time highs only perhaps a headline or two away from jumping above last September’s peak reading of 2940.91. Tech keeps ramping along its wedge pattern irrespective of what else is happing in markets and is seemingly making new highs every day. And while banks and small caps keep lingering making little progress as they have done for months volatility remains compressed. Indeed implied volatility across all asset classes has plummeted back to levels only seen a few times in recent years:

Combined with low volumes it’s the kind of recipe that opens the door for the combustionscenario:

But there’s little talk, in fact hardly any, of actually selling. De-risking. Hedging. Or outright shorting. Everybody is expecting new highs and a largely stable market for the rest of the year.

But precisely because complacency is back in such a big way I want to highlight some charts that leave room for an entirely different interpretation.

I call them the Danger Charts, because of their patterns and structures.

Before I outline the charts: I recently spend some time with the folks at RealVision and was asked about my thoughts on markets, central banks, technicals, etc. They have a great interview format as it allows you to go into a bit mored depth. Here’s the interview which gives you a bit more context on how I view markets at the moment:

As long as there is no change to the current market program markets can keep drifting higher, but should any of the charts below “break” we may find ourselves in a very different market environment quickly.

You’ve seen the massive wedge, it keeps tracking very precisely, the danger: What happens when it breaks to the downside:

Rising wedges don’t matter you say? Allow me to retort:

When you ignore rising wedges.$MMM

Volatility compression in context of these wedges? Watch out:

Doesn’t mean it can’t go higher, but it means all highs are coming on negative divergences. Big ones.

$JNK is great again, but what happens if it reverses in context of all these wedge patterns?

Broad based rally? Not so much, key sectors are not playing along:

Either this means they will play catch up or they are signaling something’s not right with the rally.

$SPX and $NDX levels give rise to great bullish perception, but is that deceiving?

Here are key index performances since the January 2018 highs:

Not so hot other than tech. But that’s 15 months of little progress other than tech, in fact what is tech’s gain is the banks’ loss. In context of all these dovish central banks and jawboning and buybacks perhaps this performance is a lot less impressive than it seems. Something to ponder.

What is hot? Semis. Excess much? Look sustainable to you?

A dangerous chart in my view especially considering the underlying fundamental picture: 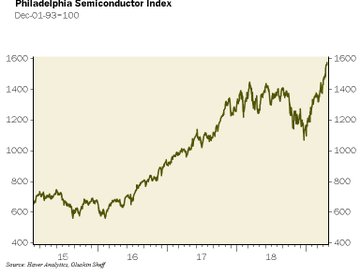 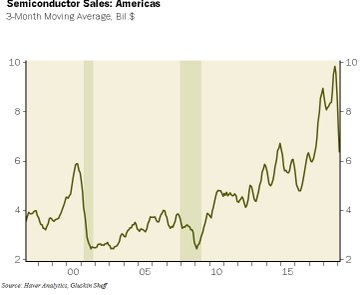 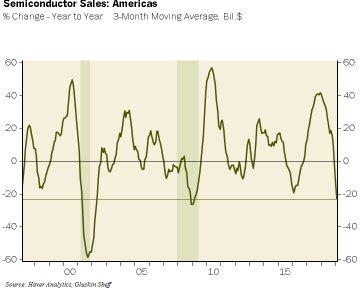 The SOX index has soared 36% this year, doubling the performance of the overall market even with a massive decline in sales, both domestically (-23% YoY) to the lowest level in two years and globally as well (-11%). Whoever said logic had to prevail?

That’s a lot of optimism.

A LOT of optimism, see $MSFT:

Any of these charts are at risk of big reversals. To believe in much more upside is to believe in further and further technical disconnects.

And then there is the $DJIA. It’s been left out of the new highs party so far. And because of that it offers perhaps a unique perspective here:

And $SPX heading toward that broadening top trend line you saw in the first chart? Well, there’s the weekly $ES chart:

It just hit a bit of trend line resistance.

Look, I’m not saying markets can’t go higher. They could as I outlined in Combustion, but at this precise moment there are a number of charts that suggest things could get ugly fast if anything breaks and plenty of charts, especially in tech, are overbought and stretched enough that even a smaller pullback could break these tight patterns.

So if nobody is warning you about downside risk I’m at least trying to raise awareness that there might be. Quite a bit.