The Unintended and Deleterious Societal Consequences of Quantitative Easing

This is a syndicated repost published with the permission of The Felder Report. To view original, click here. Opinions herein are not those of the Wall Street Examiner or Lee Adler. Reposting does not imply endorsement. The information presented is for educational or entertainment purposes and is not individual investment advice.

“As I look back, it now seems that, with all the thought and work and good intentions, which we provided, we achieved absolutely nothing… nothing that I did, and very little that old Ben [Strong of the Federal Reserve] did, internationally produced any good effect – or indeed any effect at all except that we collected money from a lot of poor devils and gave it over to the four winds.” -Montagu Norman, Governor of the Bank of England 1920-1944

Since the financial crisis nearly a decade ago, the Federal Reserve has printed trillions of dollars in an effort to create a “wealth effect” in the economy. Their theory goes that quantitative easing would make for rising prices of financial assets which should, in turn, make the wealthy feel more confident and thus spend more. By this process, a trickle-down effect would boost the economy.

Last year, however, I started to note that, even if this theory were true, a number of developments could possibly derail this “wealth effect” and even put it into reverse. Those developments have continued into 2017. High-end home prices continue to slump.

Bear market for home prices in Aspen and the Hamptons: http://www.cnbc.com/2017/01/26/luxury-home-sales-continued-to-slump-in-the-fourth-quarter.html …

Luxury home sales continued to slump in the fourth quarter

And luxury retailers are suffering at least as much as the major department stores. In fact, sales here have not been so poor since the “Great Recession.” 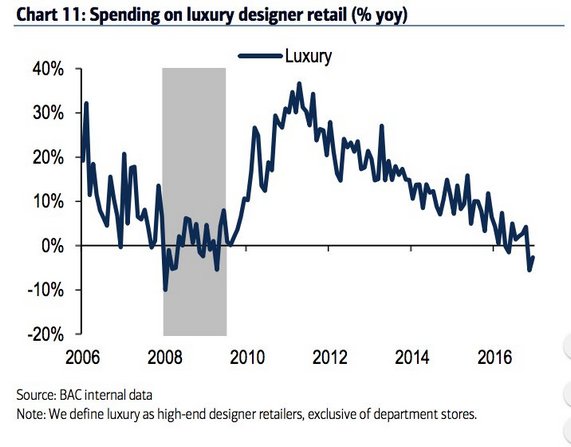 At the same time that these luxury markets are rapidly declining, the stock market is soaring to all time highs. This is probably all the evidence we need to understand that the wealth effect is a myth. Still, the BIS recently quantified the failure of quantitative easing to boost the economy even while noting its efficacy in boosting asset prices.

So the Fed has accomplished its goal of making the wealthy wealthier it just hasn’t trickled down to the rest of the economy as they had hoped. The end result is the Fed has only exacerbated the greatest wealth inequality in this country since the Great Depression.

The fact is rapidly growing wealth inequality, rather than boosting the confidence of the wealthy, has had the opposite effect, making them increasingly concerned about its societal ramifications.

Doomsday Prep for the Super-Rich

Some of the wealthiest people in America—in Silicon Valley, New York, and beyond—are getting ready for the crackup of civilization.

And rightly so. While the rich have become richer in recent years, the average American has only become increasingly squeezed by inflation in things like rent and healthcare while their wages have remained relatively stagnant. 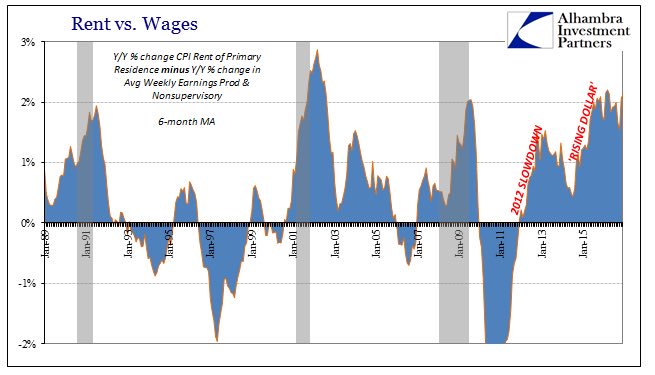 Why the current economy feels like recession to so many: http://www.alhambrapartners.com/2017/01/18/cpi-hits-two/ … by @JeffSnider_AIP

This dramatic disparity in economic fortunes between the wealthy and the rest of the country in recent years is surely one of the major drivers behind the rising global trends toward populism and anti-elitism.

And I can’t help but think of those famous words quoted above and uttered by the former Governor of the Bank of England near the end of his life. Trillions of dollars printed and ultimately pumped into the asset markets over the better part of the last decade and to accomplish what? To enable corporations to borrow cheap money to buyback stock (give it over to the four winds)? To create the sort of societal division that foments unrest? To allow the wealthy to be able to afford the “survival condos” to ride it out? In years to come, with the benefit of hindsight, will Ben Bernanke and Janet Yellen feel any different than their famous forebears?

The withholding data is the real deal. It continues to show the US economy growing rapidly. Inflation will continue to run very hot, and the Fed will remain under pressure to reduce QE. That showed up this week in Powell’s statement that the Fed will stop saying the bad word, “transitory” because people misunderstand what the Fed means by it. We know otherwise.