GDP – Even Less Than Meets the Eye

This is a syndicated repost published with the permission of 720 Global. To view original, click here. Opinions herein are not those of the Wall Street Examiner or Lee Adler. Reposting does not imply endorsement. The information presented is for educational or entertainment purposes and is not individual investment advice.

The most common statistic used to measure the size and growth rate of a nation’s economy is Gross Domestic Product (GDP).  However, GDP as most commonly used can be a flawed measurement if one tries to infer that the size or growth of economic activity is well correlated to the prosperity of its people. Consider China and the United States for example. The U.S. has a GDP of approximately $16.5 trillion and a population of roughly 325 million while China has a GDP of nearly $11 trillion and a population of approximately 1.4 billion. One could say that China’s economy is about two-thirds the size of the U.S. economy, however when one considers how that activity is spread amongst the citizens, China’s economy is only one-seventh that of the U.S. Accordingly, Chinese citizens are clearly less productive and prosperous than U.S. citizens

GDP per capita (per citizen), as demonstrated above, is a valid way to measure the efficiency of one nation’s economic output versus another and is also an important statistic to gauge the productivity and prosperity trends in one country.  We have frequently shown the declining trend in secular GDP growth in charts like those shown below. 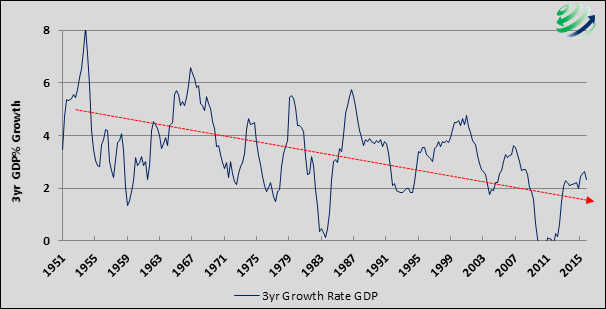 Above, GDP is plotted on an absolute basis and does not take into account the amount of economic activity or economic growth per person. Below, we show the ten-year growth rate of GDP per capita.
Ten-Year GDP Growth Rate Per Capita

As one easily notices GDP on a per capita basis is more worrisome than when viewed on a total basis as in the first two graphs. The economic growth rate per person is currently below one half of one percent. More concerning, it is below levels seen during the great financial crisis in 2008 and it is still trending lower.

This graph confirms our macroeconomic concerns and helps explain, in part, why so many U.S. citizens feel like they are being left behind. Factor in that many of the economic spoils are not evenly distributed, as assumed in this analysis, but are largely accruing to the wealthy, and the problem only worsens. As such, the growing social anxiety and trend towards populism, be it conservative or liberal leaning, will not likely dissipate if the aforementioned economic trends continue.

720 Global is an investment consultant, specializing in macroeconomic research, valuations, asset allocation, and risk management.  Our objective is to provide professional investment managers with unique and relevant information that can be incorporated into their investment process to enhance performance and marketing. We assist our clients in differentiating themselves from the crowd with a focus on value, performance and a clear, lucid assessment of global market and economic dynamics.

720 Global research is available for re-branding and customization for distribution to your clients.

For more information about our services please contact us at 301.466.1204 or email [email protected]

Reason to Stay Optimistic on Gold

The 13 week cycle up phase aborted early and the pullback has negated the base breakout. When that happens there’s usually a recovery before a second high that confirms the top. I want to remain optimistic that this will only result in a mild correction/consolidation. As long as the 10-12 month cycle indicators continue to signal an up phase, that’s where I’ll give the benefit of the doubt.