Betting on the race to the bottom

Reposted from Bruce Krasting’s blog with his permission.

On Monday and Tuesday the market’s attention will be on the USA and the negative economic implications of the Nonfarm payroll (NFP) miss. Market eyes will also be focused on the bond markets in Italy and Spain. As of last Thursday, Europe seemed to be on the verge of another “accident.” The EURCHF closed the week a fraction above the 1.20 peg to the Euro. The Swiss National Bank will likely be forced to show its muscle. While the peg will not break, news of the attack will rile the FX markets.

If this scenario plays out, the Yen should benefit against the dollar and the Euro. If the Yen crosses get cheap, I think it will be a good opportunity to short the Yen. As bad as Euroland appears, and as shaky as the USA looks, Japan looks like it might end up winning the race to the bottom.

There are two very big issues that Japan is confronting; energy and taxes. Both of these issues will come to a head over the next sixty days. I don’t see a soft landing.

Fourteen months ago Japan had 54 operating nukes. Today it has one. By the end of May, it will have none.
.

The Japanese press is discussing options such restarting the nukes, but many people want to shut them all down: 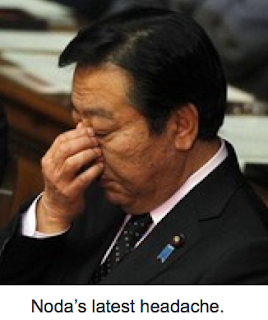 There are two significant consequences of the shutdowns: (A) soaring imports of expensive hydrocarbons (LNG, oil and coal), and (B) this summer, there will be as much as a 12% shortfall in electricity to to cool homes and run factories.

The shutdown of the nukes has already led to a major turnaround of Japan’s external trade position. In 2011 Japan reported its first annual trade deficit in over 30 years. The shortfall came to Y2.5T ($32B). In 2012 that number could be as large as $100B.

The shortage of “juice” this summer will cause cut backs in supply to big industry. As a result, industrial production will fall. Depending on the severity of the summer slump, Japan could face negative GDP growth for the full year. This will translate into more red ink in the national budget (already 10+% of GDP). More debt will have to be issued to cover the gap. Japan’s already insane Debt to GDP (230%) has nowhere to go but up.

Japan is leading the world into trouble as far as demographics go. The Social Security and medical costs of its aging population are exploding. Unlike in the USA, most of the Japanese leaders have acknowledged that the country’s position is un-sustainable. Not a day goes by without it being the subject of an article in the press. On March 31, the Noda government formally proposed doubling the consumption tax from 5% to 10% in a desperate effort to shore up the government’s empty coffers. The proposal for new taxes will be debated in the Japanese Diet in April. A final vote is anticipated in June.

Japan’s politics are not unlike that of the USA. The opposition parties will do anything to undermine the efforts of those in power. My reading is that the LDP would support a tax increase as a philosophical matter, but it will oppose Noda’s legislation with the objective of bringing down the government.

It’s a good bet that the LDP will succeed, and the Noda government will be forced to call for new national elections. That would be a “worst case” outcome. As of today, polls show that there is substantial opposition to the new tax. Failure to pass new taxes would put Japan on a debt trajectory pointing to infinity.

Political instability in Japan is becoming a real issue. The country has had six Prime Ministers in six years. Another recession may kick in this summer. The trade deficit will be at levels never seen before. ($500m USDYEN must be bought every trading day to fund the deficit.) The failure of the country to pass new taxes will force downgrades of the public sector debt. Japan will be on track to exceed 300% Debt to GDP.

I like USDYEN on the long side at 81 and under. EURYEN is hard to call, and for the time being is a “stay-away”. If the EURYEN cross would somehow get down to around 100, I think it would be“safe” to get long.

Head and Shoulders Above

The stock and bond markets face a triple whammy at the end of this month. In this report I’ll show you what those three things are, why and how they will impact the market, and what you should do about it (subscriber version only). These three things will pose a grave threat to the Treasury market, to short term interest rates, and ultimately to the stock market.