The real measure of sustained and sustainable improvement in the US economy isn’t just total employment; it’s full time employment. Part time jobs normally don’t pay enough to even pay the rent (The rent is too damn high.) let alone support a family. When business won’t invest in hiring full time workers, that may be good for their profits in the short run, but it can’t support sustained economic stability, and it certainly won’t promote long term growth.

By that standard, even though today’s jobs report showed great growth, it is not the kind of growth that will sustain a stable or growing economy. Instead the numbers show an economy retarded by the dead weight of too many people not working.

The government’s household survey showed an increase of 476,000 full time workers in October, based on the actual, not seasonally fictionalized, survey data. That’s the best October performance since 1996. Sounds great, right?

Full time employment peaks in July or August and then typically declines until January. This year’s drop since July is 303,000. That is the best performance since the data on full time employment started being tabulated in 1968. This is very good news indeed!

The devil, as always is in the details. The number of those employed who usually work full time this October was reported to be 113.5 million. That’s better than the last two years. It’s an increase of 1.86 million full time jobs since October 2009, for an average increase of over 77,000 per month.

So while it’s great that the numbers appear to be improving, we have to ask ourselves, “Improving from what?” These numbers remain equivalent to the worst levels of the past 43 years. 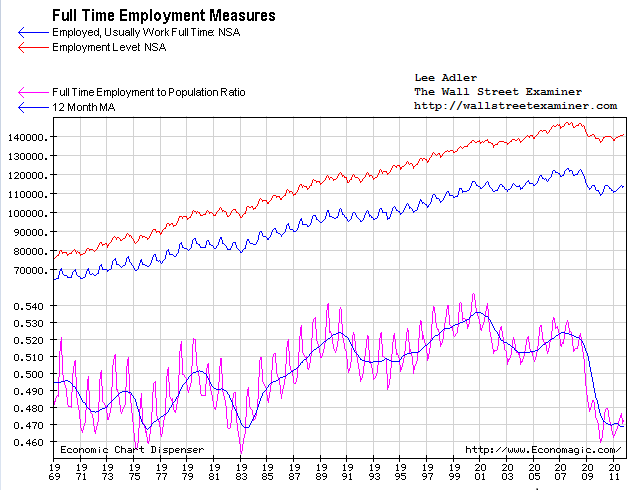 October’s improvement may even prove to be a fleeting mirage. Federal wage tax collections for the full month of October were down by 1.3% on a per diem basis versus September. The BLS household survey is conducted earlier in the month. Back on October 20, withholding tax collections for the month to date were running 1.7% ahead of September. That’s consistent with the gain in October employment which the BLS reported.

However, by the end of the month, that advantage seems to have disappeared. Over the last 10 days, withholding tax collections are virtually flat versus the 10 days through October 3. Furthermore, in real terms, adjusted for the change in employment costs, withholding for the past 10 days is down 3.7% from last year. Some, but not all, of that is due to the cut in payroll taxes. The data suggests that no more people are working today than were working a year ago.

As the graphic shows, the US employment picture has not even begun to recover from the devastation that took place from late 2007 through mid 2009. It’s just laying there dead in the water. This is not recovery. Furthermore, real time withholding tax data, which is not subject to survey error or statistical manipulation, hint at recent weakening. This data suggests that the the signs of improvement in the BLS data were little more than a dead cat bounce from brutally bad levels.

Reason to Stay Optimistic on Gold

The 13 week cycle up phase aborted early and the pullback has negated the base breakout. When that happens there’s usually a recovery before a second high that confirms the top. I want to remain optimistic that this will only result in a mild correction/consolidation. As long as the 10-12 month cycle indicators continue to signal an up phase, that’s where I’ll give the benefit of the doubt.