SPX and NDX Update: Key Levels Which Could End this Historic Rally

Sometimes you get the bear, sometimes the bear gets you.

Thursday saw the rally extended even further, once again blowing through my upside projections like an over-achieving marathon runner.  Thursday had the distinct feel of a “buying panic.”  All the sudden, people are no longer afraid of losing money on a decline — they are afraid of missing the rally.  Rallies often climax with these blow-off type moves.

The Fed meeting is fast approaching, and the Fed has been floating more innuendos of Quantitative Easing.  QE is now so firmly entrenched in the psyche of investors, that the Fed doesn’t actually need to implement QE3; all they need to do is hint at it.  Investors have become a bit like chastened dogs… all the Fed needs to do is roll up the newspaper of QE while giving investors a menacing glare, and investors obediently cower in anticipation of being struck.

I sincerely doubt there is more QE forthcoming, as was my opinion the last time this rumor floated, back in September.  The Fed is between a rock and a hard place here: more QE at this stage would be a good move only if the Fed’s intention is to convert the dollar into a competitive brand of toilet paper.  The last Fed meeting brought us Operation Twist; I see no reason why they would suddenly decide to scrap that program for more QE… especially with the market in rally mode and the current massaged economic numbers hovering well above crisis levels.  No, if there’s ever to be QE3 in 3D, they’ll need to save it for after the crash. 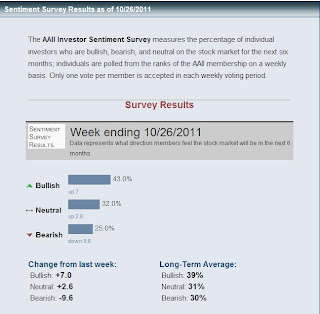 Investor sentiment is now reaching what could be considered as decidely bullish levels, as shown in the screenshot on right.  You can see that the bullish sentiment is about 4% above the long-term average, while bearish sentiment is 5% below the average.  This is what we would expect to see near a second wave top.

On a less exciting note, a couple of my preferred counts are now piles of smoldering ash on the market floor.  Yesterday I warned:

If we are indeed approaching a major top, the market’s number one priority right now is to keep everyone as confused as possible.  If the market makes its intentions clear, there will be nobody left to take the other side of the trade.
﻿Apparently, I didn’t anticipate myself being one of the confused.  After apologizing to my blog readers for blowing the count, I sat down and wrote a letter:
Dear Abby,
The market has rallied a lot stronger than I expected.  The Dow Transportation Average has staged its most impressive rally since 1939, and the S&P is having its best month since 1974.  Am I crazy to keep insisting this is a bear market rally?
Signed,
Bearish in Hawaii
I received a reply almost immediately (probably because I wrote it):
Dear Bearish in Hawaii:
First of all, you’re even crazier than you think, because I don’t do this column anymore, my daughter does.  Second, this is exactly the purpose of bear market rallies.  Investors need to believe that the trend has changed.  This clears the majority of buyers out of the way, which then makes an unobstructed path to new lows when the selling kicks back in.
Well, that made a lot of sense to me.  The other thought I had was that if this is, indeed, the bear market rally which precedes a generational crash, it is probably appropriate to have a generational rally.  With those thoughts in mind, I re-drew the charts of the SPX and Dow.
The main error I made in my preferred count was assuming this was all one wave off the October 4th low.  I based that on the idea that the strength of the rally argued for the interpretation that it was a C wave (note to other Elliotticians: I was actually viewing the rebound off the August low as (w) (x) (y), with (y) being an expanded flat; this wave being c of (y).  I annotated the whole correction as a simple a-b-c so as not to confuse my readers any further).  Apparently, either that interpretation was incorrect, or my placement of waves 1 and 3 was incorrect.  It’s largely immaterial at this point.
Several articles ago, I listed a few alternate counts, including the possibility that we were in an A-B-C rally off the October low, with A and B complete.  This now appears to be the more likely case.
Interestingly, the observations I posted in the article a week ago on Wednesday were causing me to look for more upside at a point when many Elliotticians using the A-B-C count were still looking for more downside… but yesterday, the shoe was on the other hand (or whatever that saying is).  I was looking for more upside, followed by a reversal, while the A-B-C count watchers were just looking for more upside (not sure how many were expecting the amount of upside we actually got).
The market is fickle… we all take our turns being right or wrong.
So… water under the bridge.  At this point the goal is still to try and identify the top.  We’ll take a look at the changes that have to be made to the SPX count in a moment, but first I want to focus on the one index that behaved exactly as I anticipated: the NDX.
Despite the fact that the NDX performed as projected, I hate surprises.  So I went back and scrutinized the NDX chart as well, searching for other possibilities.
One very important observation I made while re-examining the counts is that there is another interpretation of the long-term NDX count.  Under this newly-discovered interpretation: it is possible that the NDX has not actually started its bear market wave yet.  It may instead be rallying off a fourth wave low, in the process of completing a fifth wave up — meaning it could make a new high for the year, and then officially kick off its bear market from there.  I am still favoring my original interpretation of the NDX chart… however, if the NDX breaks its 2011 high, it will prove that this alternate count is probably the correct one.
On the chart below, I have primarily annotated the alternate count, to highlight the changes and share what I’m seeing.  The preferred count is shown in green, but only the major turns are annotated.

Interestingly, the NDX was something of a laggard yesterday, ending the day less than half a percent above its prior swing high.  It also shot up right into the hypothetical resistance indicated by the ending diagonal drawn on the chart.  The NDX has followed my projections very well almost continuously since September 18th.  That’s a pretty good run, so hopefully I’ve got this one pegged a little better than the SPX and Dow.  We’ll have to keep watching and see if the end also plays out roughly as expected (assuming of course, that we are nearing the end of the rally).  The good news is that the large-cycle alternate count allows for some wiggle room, and also allows the NDX to break its 2011 high without causing any significant technical damage to the big picture outlook.
Another fun fact is that the ending diagonal works fine in this position for either count, because C waves and fifth waves are both five-wave motive waves, so the sub-minuette count functions the same for both.  The chart below is labeled with the preferred count, with the alternate from the last chart only noted once, by the “Alt: B” label:

Despite the lingering question of whether the NDX is in wave (5) or wave (2), my short term NDX count generates high confidence that the top is likely very near.  Nailing it down to the penny is more the question.
There is always the potential that the black “Alt: 4” label is correct, which eliminates the ending diagonal and leads to two possibilities:
1) Thursday’s high was it, and the top is in.
2) The NDX will form a larger fifth wave.  If one were to consider shorting, the safe way to play this move is to wait for a decisive break of the lower red trendline before shorting.  Trade beneath the “Alt: 4” label will almost certainly confirm the trendchange.
If the NDX is in the final two waves of an ending diagonal, be aware that the final wave up in the diagonal can end short of the prior high or overshoot it.  The behavior of the last wave in a diagonal is pretty much impossible to predict.
On to the SPX.  For simplicity of explanation, the SPX has forced me to shift to the view that this is, in fact, a three-wave a-b-c rally.  As I see it, there are two likely possibilities on the SPX:
1) The ending diagonal I was favoring was right all along, but we had an exceptionally large wave (v) overthrow.  This count would mean the top is in place.
2) We are forming a garden-variety five wave impulse up, with a target of 1305-1330.
What I like about option 1 is that it reconciles better with the preceeding wave structure.

What I like about option 2 is that the Thursday rally looks impulsive, which doesn’t fit the diagonal structure — and this option draws the rally out roughly into the time window of the Fed meeting, so the market can sell off after Bernanke announce there will be no QE3.  Also, this option would further break the will of bears, and turn more participants bullish.

I am very slightly favoring the view that the rally is finally over, but I’m pretty evenly split here on the two counts — so I’ve marked the key levels to watch on the SPX chart: a break of Thursday’s high on the upside would favor option 2;  a break of 1256 on the downside would virtually confirm option 1.  First support comes in around 1267-1270.

So the possibility exists that the top is now in place.  We have key levels to watch for breaks to the upside and downside — now we just have to wait for the market to tip its hand.
The original article, and many more, can be found at http://PretzelCharts.blogspot.com

Subcscribers click here to download the complete report. The Fed poured $132 billion of QE into the accounts of Primary Dealers between October 14 and…

More Sells Than Buys in Screen, But I Added Two Buys This Week

Technical Trader subscribers click here to download the complete report. This Friday’s screens had 15 buys and 40 sells. That compares with 24 buys and…